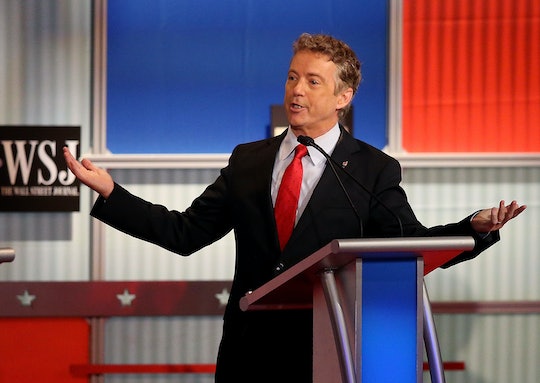 Rand Paul Beat The Buzzer During The GOP Debate, & In That One Sense He's A Total Winner

With so many candidates vying for the sole spot as the Republican candidate for president, it can get a little bit confusing to decipher who the real enemy is. It feels like party as a whole has declared Hillary Clinton as Public Enemy #1, but I disagree. During tonight's GOP debate, the real challenger was the time-off sound. And Presidential hopeful Rand Paul was the only candidate to beat the buzzer. (Hey, we're all a little competition weary already, and we've still got a long way to go. Let's just get some satisfaction out of declaring a winner for anything at this point. The sense of resolution will be refreshing.)

Yes, there were different candidates with different strengths and polls will give us all a diverse range of successes and failures from the night, but as far as I'm concerned, Rand Paul is the only winner. Because if this debate were managed like any of the arguments I've had with my siblings, everyone else would have been disqualified. It's good to be the winner, even if only due to a technicality.

Plus, Rand Paul has reaffirmed that he's the prettiest man on the stage by abiding by the rules of Hollywood: Get off the stage before the music ends or it will be the end of you.

Here are the best tweets from the night:

It Was Like Every Other Award Show We've Seen

It Was Rand's ~Major~ Moment

If nothing else, Rand, you've got this. This, and the the immaculate dream that is Justin Timberlake's retired ramen noodle hair, which you are keeping alive. We salute you for all of it.