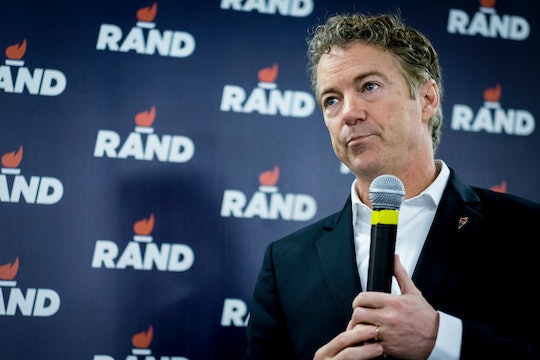 On Wednesday morning, Kentucky Sen. Rand Paul said he will drop out of the presidential race, according to Bloomberg. The news comes as a little bit of a surprise, because, though he didn't win Iowa, he did come in fifth place — which is far higher than many other candidates who have yet to drop out. CNN reported that Paul's decision may have, in part, resulted from the fact that he's running against a wealthy Democrat in the race for his Senate seat.

Paul released a statement Wednesday confirming his decision to drop out. "It's been an incredible honor to run a principled campaign for the White House," Paul said in the statement, according to CNN. "Today, I will end where I began, ready and willing to fight for the cause of Liberty." Paul won just 4.5 percent of the vote during Monday night's Iowa caucuses. He finished behind Texas Sen. Ted Cruz — who won the caucus — businessman Donald Trump, Florida Sen. Marco Rubio, and retired neurosurgeon Ben Carson, in that order.

Paul also said that he looks forward to serving another term as the senator of Kentucky, according Bloomberg:

I will continue to carry the torch for Liberty in the United States Senate and I look forward to earning the privilege to represent the people of Kentucky for another term.

Paul was well known for being the quirky, libertarian-leaning candidate among the Republicans. For example, he sold a "Filibuster Starter Pack" during his 10-and-a-half hour filibuster against renewing the Patriot Act. It came with fun gadgets such as a "spy blocker" that goes over a computer's web cam, according to USA Today.

Paul finished fifth in the Iowa caucus, and that wasn't exactly damning. For example, Arizona Sen. John McCain came in fourth place the year that he won the nomination and ran for president against then-Illinois Sen. Barack Obama in 2008. But, because the top four candidates numbers were relatively close and much higher, Paul's fifth place finish wasn't as viable as McCain's fourth place in 2008. Further, though Paul finished in fifth in Iowa, he was projected to fall as far as ninth place in the New Hampshire primaries next week, according to Politico.

Politico also reported that money was becoming a problem for Paul's campaign. He ended the fourth quarter with just $1.3 million in the bank for his campaign. (Cruz, in comparison, has $18.7 million on hand, according to the New York Times.) Paul's demise may have started when he was sent to the undercard debate for the sixth GOP debate, according to Politico. He boycotted the event and said that he was running a "first-tier" campaign, and that may have been his downfall.