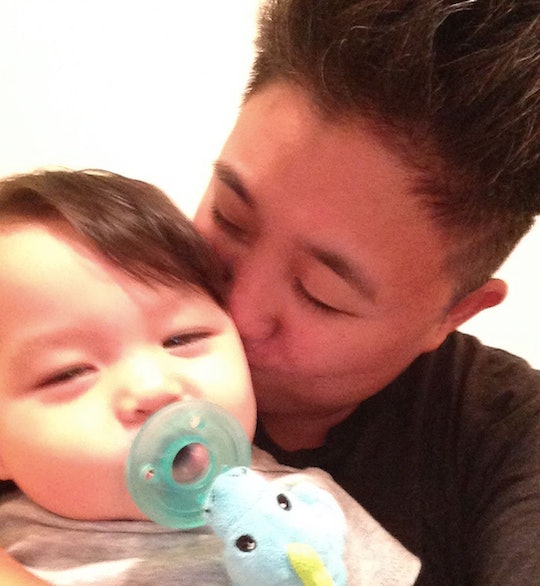 Randall On 'This Is Us' Forgave His Dad, But As An Adopted Child, It's Not That Easy

I was adopted as an infant and until the premiere of This is Us, I had shed little to no tears about it. The pilot episode of This Is Us took many by surprise for its twist ending, but it was the Randall-finding-his-birth-father storyline that surprised me the most. I knew from the promos that he found his birth father, but I didn't really pay attention to the circumstances in which he was left. Something about hearing another adoptee talk about being left on a "doorstep" like I had been, however, unexpectedly gutted me.

My parents had made it a point to instill pride in my siblings and I about our adoptions and our heritage. We all knew our own adoption stories as well as I suppose other children know their birth stories: where we had been left by our individual birth parents and that there had been no other information beyond our birth dates left with us. And, our parents did two very critical things: they made the Korean names our foster parents gave us our middle names, ensuring our heritage stayed with us even while being raised by two white Americans, and they never once made us feel like they "saved us" by adopting us. Even though I was left on a doorstep, and my one brother was left at the base of a statue, and my sister was left in a hotel room (umbilical cord still attached), and my youngest brother was left in the woods where hunters found him, never once have our parents ever in any way even insinuated that they rescued us. Instead, they've always made us feel like we made them a family, and that, if anything, we saved them.

Adoption is pretty common these days, but when I was growing up, most of my classmates only understood adoption as happening as a result of a cabbage patch or as sitcom fodder wherein rich white men adopted black boys in need. That's why it was extra important that my parents helped start an organization called G.I.F.T. (Gathering International Families Together) for other families who had adopted children. Every few months, we'd get together with other families who looked like ours for fun events where none of the children had to explain why we didn't look like our parents, because none of us looked like our parents.

We talked openly and frequently about being adopted, but more importantly, about being our parents' children. Biology be damned, my parents and my siblings and I would talk often about which parent we thought we were the most like, which traits we seemed to "inherit" from each of them. In our house, nature never stood a chance against nurture. So engrained was this idea that it really wasn't until I became a parent myself that I often forgot that I don't resemble my parents.

After he confronted his birth father by saying, "You see, I turned out pretty alright, which might surprise a lot of folks considering the fact that 36 years ago my life started with you leaving me on a fire station doorstep with nothing more than a ratty blanket and a crap-filled diaper," I found myself in the fetal position on my couch, unable to stop the torrent of tears as my body shook uncontrollably.

As an adult, I wanted to somehow give back to Spence-Chapin, the adoption agency that had made my family a possibility. After looking into volunteer opportunities, I applied for, and was accepted as, a mentor for Spence-Chapin's adoption group. Similar to the group my parents helped start, once a month young adoptees get together for some fun activity and also discuss being adopted. The interview and background check were more difficult on both a professional and an emotional level than anything I've ever been through. And after becoming a program mentor, talking with other mentors and the amazing young adoptees forced me to really look into the entire spectrum of emotions that often come with being adopted. I realized that no matter how textbook awesome my parents did in raising us, it was OK to still have conflicted feelings about my birth mother and my adoption.

Scratching the surface of a 30-something-year itch that I didn't even realize existed left me surprisingly open, when I heard Randall say in the pilot episode of This Is Us that, "He was the guy who left me at a fire station, probably because he couldn't think of anything more cliché," I found myself tearing up. And then after he confronted his birth father by saying, "You see, I turned out pretty alright, which might surprise a lot of folks considering the fact that 36 years ago my life started with you leaving me on a fire station doorstep with nothing more than a ratty blanket and a crap-filled diaper," I found myself in the fetal position on my couch, unable to stop the torrent of tears as my body shook uncontrollably.

Over the years I've often wondered if, like William, my birth mother waited somewhere nearby to make sure I was found and taken care of. I've even wondered if she heard me cry.

Looking back, I realized I never once thought about the condition in which I was left. In fact, I don't believe I'd ever been able to face the fact that I was abandoned. Instead, I chose to think of my abandonment as an act of altruism. My birth mother had left me on the mayor of Seoul, Korea's doorstep. Surely, of all the doorsteps in Seoul, she couldn't have chosen any better. She clearly wanted to give me the best chance at a better life, right? Similarly, Randall's birth father left him at a fire station. He didn't leave him in a dumpster or in an alley. He left him somewhere where real-life heroes were, where the people who save lives could help save his. Maybe he didn't realize that he was doing that in the midst of his high and emotional agony over the death of the love of his life, but the bottom line is that, like me, there were much worse places Randall could have been left.

But that last part of what Randall said: "A ratty blanket and a crap-filled diaper" kicked me in the emotional gut. Maybe it's partially because I'm a parent myself, but the idea of simply dropping my baby on a doorstep — no matter if it's the mayor's or the local fire department's — and being able to walk away and not know for certain that they were OK is utterly inconceivable to me.

Over the years I've often wondered if, like William, my birth mother waited somewhere nearby to make sure I was found and taken care of. I've even wondered if she heard me cry. But now, as a mother myself, I fully understand exactly how that sound can rip through a mother's heart like nothing else, and I cannot fathom how a mother can keep walking in the wake of her baby crying. Even now, a year into parenthood, I can't shake the guilt of leaving our baby girl in her diaper too long. Though my wife and I are undoubtedly less paranoid about changing her diaper than we were when we first brought her home from the hospital, I still can't stomach the idea of her discomfort.

And, not only do I wonder if I was left with anything like a blanket, but I wonder what I was left in. Was it a basket, as I've believed all these years, or was it a cardboard box, recycled from an existence of holding household objects, material things? And how does one decide the best container for abandoning their infant? Do they just grab the closest thing to them as they're rushing out the door? My wife and I debate the choice of stroller we are going to use — which has better wheels to handle the weather or which has a better cover in case the sun is going to blaze too brightly that day — so what thought, if any, goes into picking what you're going to dump your child in in order to leave them on someone else's doorstep?

Randall's biological father knew enough in his drug-addled haze to leave him a blanket, ratty though it may have been. Did my own biological mother know the same? Did she understand how important warmth is to the vitality of a newborn? Did she even care?

Randall's biological father knew enough in his drug-addled haze to leave him a blanket, ratty though it may have been. Did my own biological mother know the same? Did she understand how important warmth is to the vitality of a newborn? Did she even care?

I didn't know any of these things before becoming a parent. Or maybe I did know but I didn't truly understand. And I sure as hell didn't face it until I not only heard the anger in Randall's words but felt the depth of it as well. His words, ever measured, were delivered with the same edge I imagine I would have if I had the courage to ring the bell of the stranger half responsible for my biological existence. But that is, I think, where we differ. Randall seemed to both simultaneously want and reject the approval of his life and the adult he had become in spite of his father's abandonment. He was understandably angry and conflicted with this dichotomy. As a viewer, I was surprised he did such a quick about-face in the premiere. He yelled and unleashed on William with the fury of a child whose very beginning started with being left on the doorstep of a fire station, and then he invited him to his home. As Randall told his wife, with "everything he wants to say or do" concerning William, he does the opposite. I'm not sure I'm there yet.

As a viewer and as an adoptee caught in the undertow of these abandonment emotions, I'm not yet ready to forgive. It's too clean, too easy — as easy as it has been for me to think of my birth mother as selfless and not selfish for the past 38 years of my life. Randall may feel ready for that. But it's OK that I'm not.

I love my parents. To their credit, they've done everything they were supposed to. They've never denied us any questions or emotions about our adoption. They raised us to be strong and to be proud of everything that makes us a family. But somewhere in the folklore of our adoption stories and in the quilting of the fabric of our existence, I convinced myself that to love one, I had to deny the other. I know now, though, that loving one doesn't negate the abandonment of another. I can subscribe to the belief that I made my parents a family while also mourning the loss of the family I'll never know.