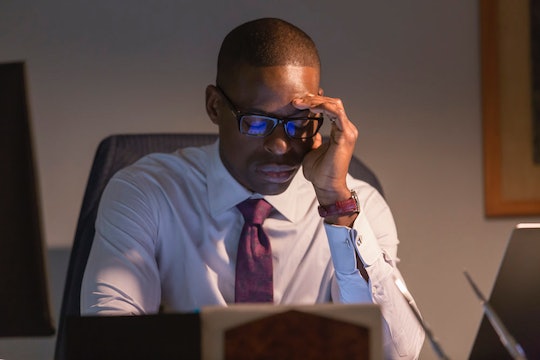 'This Is Us' Puts Randall's Health Center Stage

It's impossible to describe how much love I have for Randall on This Is Us. He is just an all-around great guy, who wants to be able to help everyone, regardless of his own well-being. So when Randall's hand started to shake last Tuesday after reaching for a glass of water on the nightstand, I was instantly fearful of what this could mean for such a beloved character. And it seems as though Randall's heath on This Is Us is still a cause for concern and won't be going away anytime soon.

Throughout Tuesday night's episode "Jack Pearson's Son," Randall became more and more filled with anxiety as the mounting stresses of his life began to take their toll. He's taking on too much at once and his body is reacting, trying to tell him to slow down. He doesn't listen at first, but it's now starting to impact both his work and his personal life. And while I thought Beth would've noticed the change in his behavior by now, it was an interesting twist to make it so that Kevin was the one who came to his brother's rescue. These two have never exactly been close throughout the years, but the fact that Kevin put his own career aspirations aside to come check on Randall was extremely heartwarming and proves how truly great this show is at developing strong character dynamics.

At first, Kevin went to visit Randall at his office in the hopes that his brother would boost his confidence in his upcoming stage performance that would be taking place later that night. But Randall had too much on his plate already and was noticeably distraught and distracted throughout the whole visit. But even then, Kevin didn't seem to think too much of it. It was only after Kevin received a call from Randall, moments before he was about to go on stage, saying that he couldn't make it because he was held up at work.

It was a legitimate enough excuse, but there was something about Randall's voice that made Kevin think of his dad and what he would do in this particular situation. So naturally, he did the unselfish thing and went to his office to check on him. It was there he found Randall in a corner, completely overwhelmed and crying over the stress of it all. The episode had also provided flashbacks to indicate that these anxiety spells are something Randall has struggled with for most of his life. Jack was always the one to help calm him down while Teenage Kevin turned a blind eye to it. But not anymore. Now he wants to be there for Randall in his time of need and it was an endearing moment to see the two of them embrace.

Hopefully now Randall's health will be properly addressed, so that he can relax and get some much needed attention that will allow for him to get better. Stress and anxiety can be very serious if ignored. Let's just hope that Kevin is able to let Randall know that he isn't alone and help lift some of the emotional burden he's been carrying for far too long.