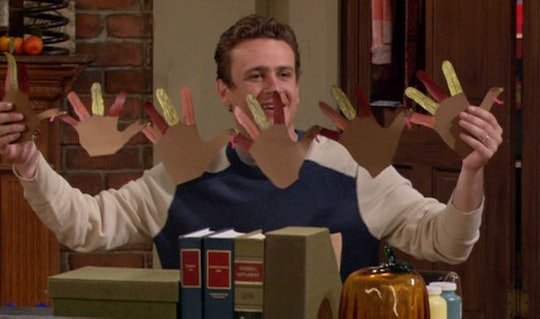 Although there were nine seasons of How I Met Your Mother, there are actually only five Thanksgiving-centric episodes, unlike Friends, which did one for each of it's 10 seasons. However, what they lack in quantity, they make up for in quality as each episode had something that made it special, funny, or even a little bit of both. Whether it was the slap bet, awkward family meetings, or the Blitz, they're all interesting in their own way. Still, some are definitely better than others.

So without further adieu, here is my definitive ranking of the HIMYM Thanksgiving episodes.

This was the first Thanksgiving episode of HIMYM and it was an big one (pun intended). Lily had a bit of a freak out after going to St. Cloud, Minnesota with Marshall and spending the day with his large family. This led to her leaving the Thanksgiving festivities to get a pregnancy test and then being arrested for public urination. However, when Marshall went to pick her up from the police station they discovered she wasn't pregnant, much to their relief and enjoyed the rest of the holiday. Though the emotions were high for this one, the episode itself wasn't all that remarkable compared to the other Thanksgiving episodes. (Season 1, Episode 9)

This was another episode that made me feel all the things. Lily and Marshall were prepping to move to Long Island, leaving the gang behind, while Ted and Barney were thinking about adoption. In the end, Lily and Marshall did make the move, but Ted and Barney didn't adopt. In fact, Barney felt he shouldn't be a dad, but that was when Robin revealed she was pregnant. That twist at the end really made this episode memorable, especially because it set up one of the saddest moments in HIMYM history, because Robin then found out she actually couldn't have kids. (Season 7, Episode 11)

Guest starring Jorge Garcia from Lost as "The Blitz," this was a really fun episode that gave a name to the fear of missing out, before FOMO was a thing. The idea behind The Blitz is simple; once you leave, something amazing happens. While The Blitz was being passed around, Ted unwittingly made a joke about his enemy, Zoey, being an evil stepmother that hit too close to home since her stepdaughter refused to celebrate the holiday with her. However, realizing his mistake, he apologized, thus beginning their friendship, which then turned into a full-on romance. (Season 6, Episode 10)

"Slapsgiving 2: Revenge of The Slap"

For this Thanksgiving, Marshall decided to let either Ted or Robin have the honor of delivering a slap to Barney, though they had to choose amongst themselves who would do it. Meanwhile, Lily was forced to face her estranged father, Mickey, after Marshall invited him over for dinner. The two reconciled and in the end Marshall ended up surprising Barney with a slap to the face. Between the slap, Lily's "You're Dead to Me" stare, and the introduction of her dad and his weird board games, this episode was fantastic. (Season 5, Episode 2)

Could there really be another episode in the top spot? It was the start of the Slapsgiving tradition, Marshall created the "You Got Slapped" song, Robin and Ted worked out their issues and became friends again, and to top it all off, it was the episode where Ted revealed that he and his kids still go to Marshall and Lily's house every year for Thanksgiving. Aw! (Season 3, Episode 9)

If you'd like to relive these episodes, you can rewatch them all now on Hulu.