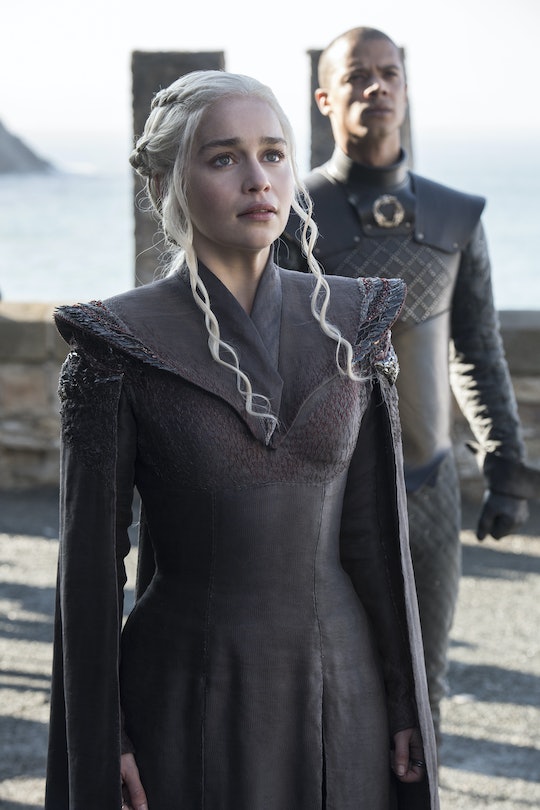 Let's Rank The Azor Ahai 'Game Of Thrones' Theories Out There

For followers of the Lord of Light, there is a prophecy about The Prince Who Was Promised. This person, who is implied to also be the reincarnation of the legendary hero Azor Ahai, will save the world, presumably from the White Walkers. However, in the latest episode of Game of Thrones, it was revealed that the prophecy is actually The Prince or Princess Who Was Promised, opening up the possibilities of who the chosen one could be. There are tons of theories about who The Prince/Princess Who Was Promised is but some theories are definitely better than others.

According to the prophecy, the savior will be reborn "amidst salt and smoke" and pull a flaming sword from the flames to fight the impending darkness. It is believed this sword is Lightbringer, the sword Azor forged and then plunged through the heart of his loving wife, Nissa Nissa, tapping into it's true power. These tidbits give some clues as to who the Chosen One truly is, but unfortunately these points are also rather vague and therefore could be applied or twisted to fit almost any character.

Here's a definitive ranking of just some of the Azor Ahai theories, in order of least likely to most likely. You may be surprised by some of the characters that make the list.

Now that Hot Pie has made a surprise reappearance it's led to the resurgence of an old joke of a theory. Reddit user Freezingman66 argued a few years ago that Hot Pie could be the hero Westeros needs and provided a pretty detailed list of kind of ridiculous evidence. For example, he was definitely born amidst salt and smoke because he was probably born in bakery.

After Sam took his family's sword, Heartsbane, at the end of Season 6, many fans become convinced this was proof that Sam is the Prince Who Was Promised. Theorists suggest the sword, which is made of Valyrian steel, could be become Lightbringer if Sam plunges it through Gilly's heart.

In "Stormborn," the Hound was asked to look into the flames and he had a vision. He could see the White Walker army and what was to come. Prior to that, during Season 6 there was a moment when the Hound stands under Brother Ray's bleeding body and Ray is wearing the Seven's Star necklace. Reddit user Daveshad points out that Azor Ahai was born under a bleeding star and this could be the moment the Hound is "reborn" into Azor.

The new "Princess" addition to the prophecy has given more stake to this theory, but not much. The most proof for this theory comes from the books. For example, it is suggested Arya was reborn from "salt and fire" because she changed her identity at Saltpans and then later drank fire wine. Additionally, her sword Needle could become Lightbringer, but who's heart would she have to plunge it through? Probably Sansa's.

Unlike Tyrion, it's actually been confirmed that Jon is a Targaryen. It was actually the flashback scene to Jon's birth that made fans even more sure he's Azor. During the scene, Lyana was bleeding out while dawn was breaking. Therefore, Jon was born under a "bleeding star."

Fans are pretty split on whether or not Azor is Daenerys or Jon, however, the reveal that the prophecy is actually The Prince or Princess Who Was Promised made fans confident it's Daenerys. If it's not her, why would that distinction need to be made? Plus, Daenerys has all the qualifications. She's a Targaryen, she has dragons, and she's walked through fire twice. Not to mention, in the novels Daenerys is often connected to the Red Comet, which is also known as the "Bleeding Star."