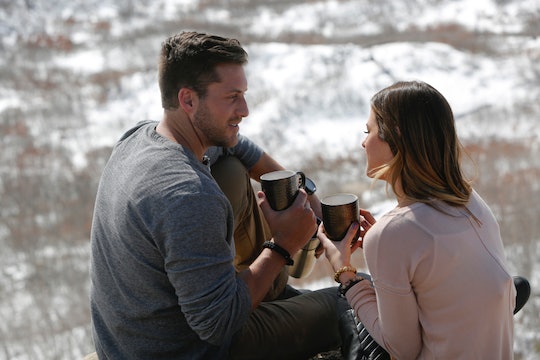 When it comes to maximizing everything The Bachelor stands for (the absurd outings, the clear desperation, the rare hint of a genuine connection) nothing does it better than two-on-one dates. It puts the contestants into even more competition than usual and all they want to do is one-up each other in order to impress the current Bachelor or Bachelorette. Two-on-one dates always highlight just who has the better connection, and one person is almost always left in the dust. Ranking two-on-one Bachelor dates proves they're the best way to weed out the competition.

Two-on-ones are awkward no matter what. Either the contestants are terrified of going home, or they're jockeying so hard to earn a rose that there's no way that they can relax. Sometimes things go so badly that both contestants end going home at the end of the night. Getting a card for a two-on-one is enough to inspire rising dread and moody dramatics, which makes for some interesting viewing — whether it's the kind of car crash you can't look away from or something genuinely compelling. So let's take a look at some two-on-one dates from The Bachelor and The Bachelorette, ranked from least cringeworthy to most.

This two-on-one date ended in a surprise when season villain Tierra ended up hanging around while Jackie was sent home for being a little too open about her own dislike of Tierra. It's a pattern that's repeated again and again on two-on-ones: contestants self-sabotage just to get rid of the other person.

It's not a two-on-one unless someone has been left behind crying in a scenic locale, and the rejected Peyton weeping on a flight deck while Andy and Tessa flew off in a helicopter was the stuff two-on-ones are made of.

Another key quality of the two-on-one is sending two contestants in together who don't much care for each other. But in addition to the animosity between the ladies, Blakeley's intensity leveled up the discomfort. After making Ben a scrapbook of their future married life, she couldn't handle the elimination and sobbed while Ben looked on. No wonder he called this two-on-one "excruciating."

After Kasey flashed Ali a tattoo he'd gotten to show his dedication (bro... never a good idea), she left him on a literal volcano while she and Justin airlifted out of there. Iconic.

This was another two-on-one that was destroyed by self-sabotage. Taylor was way too focused on bringing down Corinne, who just didn't engage. The result was that Taylor got eliminated and left behind in the bayou, bringing an uncomfortable end to a frustrating experience. It finished off with some ominous threats from Taylor that ultimately didn't go much of anywhere.

Few Bachelorette dates are more memorable than the time JoJo absconded with Alex and left Chad to wander in the wilderness — until he stalked his way back to the house to lurk outside like the villain in a horror movie.

This date had it all: controversial contestants, shocking moments, and an overflow of cattiness. After Chris encouraged Ashley to tattle on Kelsey then went back to tattle to Kelsey himself, he eliminated both women and left them alone on a bed in the middle of the desert. It doesn't get more mortifying than that.

There's no shortage of drama when it comes to two-on-ones on The Bachelor, leaving fans cringing with discomfort but always ready for more. And judging that it looks like Kenny and Lee are heading toward a very awkward two-on-one with Rachel, I have a feeling they're going to be added to the list shortly.