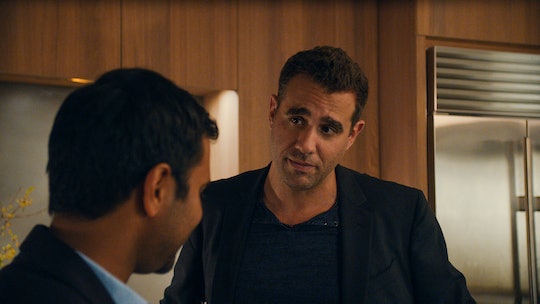 'Master Of None' Addresses Harassment In The Workplace

Warning: Season 2 spoilers ahead! The second season of Master of None deals with a number of different topics — some funny, some sad, and some serious. Aziz Ansari is a funny guy, but he also knows how to dig into real issues. Like Master of None's Raven Live segment that addressed sexual harassment at the workplace. Although the main plot of the season mostly centered around Dev's quest for love and delicious food, he also changed up jobs. He started the show hosting a reality cooking series called Clash of the Cupcakes, produced by a celebrity cook by the name of, Chef Jeff (played by Bobby Cannavale). However, later on, the two of them decide to become partners for a travel cooking show, called BFFs on Food TV, where they travel around and eat delicious food, in a parody of something like Anthony Bourdain's old shows.

It should be a good thing, but after a while rumors come up that Jeff sexually harasses women at work. Dev hears of it first from an actor friend who had heard about Jeff's reputation from another friend in the business. Then, just before doing a segment on the fictional Raven Live, Dev's agent (Danielle Brookes) sees on Twitter that he's trending after a makeup artist came forward with her story, which lead to several other women coming forward as well about similiar claims. Luckily, on the fictional Raven Live, the host Raven-Symone made sure to confront Jeff about the allegations on air.

When he tried to deflect, Raven said: "Did you think I was going to run from this? We don't run here at Raven Live. We talk about the issues here." But not everyone seemed to think so. Not Dev's agent, who encouraged him to go do the segment to "make that money," assuming that it wouldn't be addressed on the talk show. And certainly not Chef Jeff, who immediately began to call his PR team to brainstorm "talking points" for Dev, so they could keep doing the show.

This was a surprising storyline to see thrown into the mix, but honestly, it was great to see such an important topic get addressed in this way. It was also empowering to see the women standing up for themselves and refusing to stay quiet after getting treated so horribly. Co-creator Alan Yang told Mic that they wanted the approach to the storyline to be as realistic as possible:

We talked about how we don't want Dev to do nothing, but at the same time, we don't want to portray him as this white-knight character who saves the day because that's not realistic either. So our solution was to compact the timeframe and then have that scene on Raven Live where it's taken out of his hands. It's not his story at that point — it's Lisa's story.

Like the future of Dev's love life, the way that the sexual harassment allegations are addressed in the fictional Master of None world is also ambiguous. But it is portrayed as responsibly as possible, which is a good thing. Hopefully one day, a Chef Jeff storyline will feel dated. Until then, at least there are good shows like Master of None tackling the darker side of show business and the workplace environment in general.