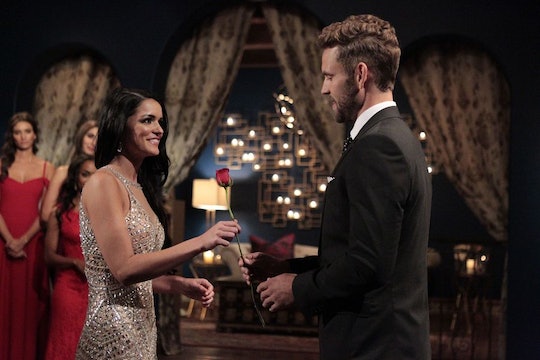 Raven & Nick Shared A Big Moment On 'The Bachelor'

The lucky winner of one of two one-on-one dates with Nick in his hometown of Waukesha, Wisconsin this week was Raven. In spite of the fact that it was their very first one-on-one, Raven met both of Nick's parents and his youngest sister Bella at one of her soccer games. But there was also a more intimate component to the date later on. Raven opened up to Nick on The Bachelor about her past relationship and he was super responsive.

After a relatively lighthearted date at a kids' soccer game, followed by hanging out at the local roller rink, Raven and Nick settled in for a more intimate dinner for two at the stunning Milwaukee Art Museum. When he asked the standard "when did your last relationship end?" question, she reintroduced the topic of her last boyfriend, who cheated on her. She finally told Nick the full story, and while there are some disturbing aspects to Raven's behavior during the ordeal, too, she and Nick did seemed to bond over their shared experience of having been cheated on.

Raven explained that her boyfriend's coworker had called her to give her a heads up that he was at a bar kissing another woman and about to leave with her. She drove to his house, let herself in, and kicked in his (locked) bedroom door to find them in the middle of having sex. She admitted to Nick feeling deeply hurt in the moment, but her response was to physically attack her boyfriend and begin throwing punches. She also admitted to hitting him in the head with the other woman's stiletto, which is particularly violent.

Nick didn't seem too concerned about the obvious issue of Raven committing intimate partner violence against her boyfriend (which, regardless of the circumstances, is not cool). He was more concerned with why she didn't tell anyone about the fact that her boyfriend cheated on her after it happened. Nick gently pushed past her initial response to get "the honest answer," which is, of course, that there was some degree of shame she felt about being cheated on, preventing her from wanting to share the experience with anyone. Nick revealed that he also experienced this type of shame when he had been cheated on.

But the best part of the conversation was when Nick questioned whether Raven had found a healthy sense of self-worth again. She gave a thoughtful answer about how working through infidelity was actually the best thing for her self-esteem, and Nick seemed very impressed by it. The two seem very deeply connected after this date. It might even be enough to take Raven all the way to hometowns.