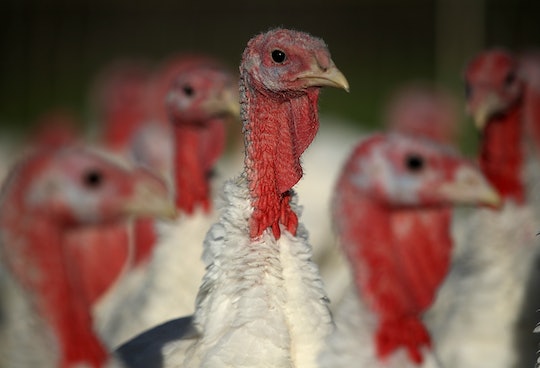 Here's What You Need To Know About The Raw Turkey Recall

Thanksgiving is just around the corner, and for most Americans, that usually involves a turkey and all the fixings. But this year, there may be a bit of added concern surrounding the glorious food-filled holiday. As CNN reported, raw turkey has been recalled due to a salmonella outbreak, and though the initial recall dates back to July, Americans still appear to be getting sick (and one person in California has actually died as a result of contaminated meat). That doesn't necessarily mean that your Thanksgiving menu needs to be drastically altered, but there are some things you'll want to keep in mind to stay safe.

The Centers for Disease Control and Prevention posted the latest update in the turkey recall on Nov. 8, and reported that the number of cases is now up to 164 in 35 states. According to the CDC, 63 people have been hospitalized in connection to the outbreak, and it appears that the contaminated raw turkey products have come from a variety of different sources, including raw ground turkey and turkey patties, as CNN reported, as well as pet food containing turkey, and live turkeys as well.

The good news, at least, is that unlike some other food recalls we've seen this year, the CDC isn't specifically recommending that consumers avoid turkey products, and raw turkey will still be available for sale. But since the salmonella risk is present, consumers are encouraged to be aware of the risks.

The first thing to know is that you'll want to pay particular attention if you have purchased any turkey products from Jennie-O Turkey. On Thursday, the U.S. Department of Agriculture announced a recall of over 90,000 pounds of raw ground turkey products from the company due to salmonella concerns, all of which share a production date of Sept. 11, 2018.

Not sure how to tell if your Jennie-O turkey is safe to eat? According to the USDA, the recalled meat all comes in 1-pound packages, and includes 93 percent lean ground turkey, taco seasoned ground turkey, 85 percent lean ground turkey, and Italian seasoned ground turkey. All packages had "use by" dates of Oct. 2, which should in itself reduce the likelihood that it's still available for consumption, though since meat is often kept longer in home freezers, the USDA recommends that anyone who may have Jennie-O turkey on hand double check the details, and discard any recalled product immediately.

Given that the Jennie-O recall appears to so far only affect ground turkey meat, your Thanksgiving bird should still be safe to cook. But since improper food handling practices can also lead to illness, the CDC has also offered up some safety tips in the lead-up to the holiday.

For one, you're going to want to ensure you've given yourself ample time to let your turkey thaw correctly. Though simply leaving it out on the counter may seem easy, bacteria will actually thrive if the meat is allowed to reach 40 degrees Fahrenheit, which will occur after about two hours in room temperature. A much safer option is to allow the turkey to thaw in the refrigerator, or "in a leak-proof plastic bag in a sink of cold water that is changed every 30 minutes." Thawing a turkey in the microwave is also an option, though the CDC has emphasized that anyone choosing that option must follow the manufacturer's directions.

Other important tips to consider? Cook your turkey to 165 degrees Fahrenheit to ensure a safe internal temperature, and don't risk guessing — use a food thermometer to be sure it's done. If you opt to stuff your turkey, do it just before you cook it, and then use your food thermometer again to ensure it has also reached 165 degrees. Even better, let the stuffing remain in the turkey for 20 minutes after it comes out of the oven to let it cook further — or simply make the stuffing in a separate dish from the get-go, as it's the easiest way to ensure it's properly cooked.

It's not just cooking temperature to be aware of, though. You'll also want to avoid washing raw turkey before cooking (it can spread germs, according to CBS News), and be sure to thoroughly wash utensils, cutting boards, and counters to avoid any cross-contamination while preparing food.

Given the risks involved with consuming contaminated food, the most important takeaway of all is that anyone who may have purchased raw turkey products first ensure they've double-checked for a possible recall. But if your meat is indeed safe to eat, it's still important to prepare and cook it safely to avoid any issues on Thanksgiving day and beyond.