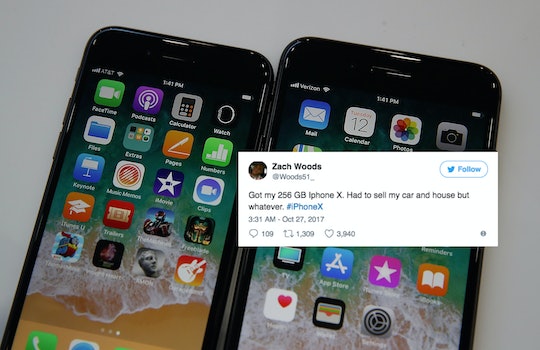 That sound that woke you up in the wee hours of Friday morning was the collective scream of approximately half of the population of Earth attempting to purchase Apple's newest, priciest smartphone. Some succeeded, many failed, and everyone was nearly hysterical by the end, as evidenced by these Twitter reactions from people preordering the iPhone X. At least we have the internet now, so instead of camping out on a sidewalk and stampeding into a store, they were able to take part in the feeding frenzy from the comfort of their own homes.

This also means that those not partaking in the feverish quest for the coveted gadget are free to observe it from their own homes, rather than doing a slow drive-by at the Apple Store like a creep. And, of course, there's the added benefit of sleeping in. It's not real time, but you'll feel like you're there as you read their tweets: the anticipation of waiting for the clock to strike 3:01 a.m., the frustration of the online queues, the joy of a confirmation email, and the despair of those who weren't so lucky. Also, everyone was super tired, and now a lot of them are super broke. Let's dive in!

Yup, it costs a grand. But what else can you do, switch to Samsung and learn a whole new operating system? Slum it with an iPhone 8, which came out over a month ago? That's crazy talk!

It's about priorities, guys. College was a long time ago, so maybe you've forgotten, but ramen is actually really good. Also, the bus is a great way to meet new people, and did you know how much they're paying for blood these days?

Whether ordering from the App Store or carriers' websites, plenty of iPhone X fans suffered from long wait times, glitches, and FOMO.

But it was all worth it to those who prevailed.

That is, until their rent check is due.

But 3 o'clock in the morning? Today's going to be rough for a lot of people.

Expect some super long lines at Starbucks today. Don't even think of going there during the afternoon crash.

But remember, there are still a few other ways to experience joy that won't break the bank.

And if you're an impatient person, maybe this party wasn't for you.

But come on, did you really think it would be that easy?

At least everyone got a free language lesson out of the deal, right?

And nothing compares to the feeling you'll get on Nov. 3, when you've got your new iPhone X and everybody else has to wait until December.

It just took a little planning and a lot of luck (and a couple week's pay, maybe).

The sacrifices we make to keep up with the latest technology, am I right?

Raise your hand if you felt like a hacker in a movie trying to type in your credit card number as fast as possible. "I need more time!"

I think they call that trickle-down economics, right?

Whatever, dude, it's only money.

It's cool, there's plenty of time in the day. Oh, but don't forget that Super Mario Odyssey and Call of Duty: WWII also come out on Friday, and you did already preorder your Xbox One X and Star Wars: The Last Jedi tickets weeks ago, right?

Shout out to everyone feeling superior because they didn't drink the Kool-Aid.

But sorry, you're still getting screwed by the iPhone X.

And if you think you ordered it correctly, there's still one more hurdle; make sure that you actually got a confirmation.

But there's good news if you missed out; some people accidentally ordered two.

Actually, a lot of people did. So you might want to check back once all those oopsies get processed to see if they're back in stock. Either that, or check eBay on Nov. 4. And you thought $1,000 was too much!

More Like This
What Is Monkeypox & Should You Be Worried? Here’s What You Need To Know
Ashley Graham Reveals She Lost “Liters Of Blood” After Twins’ Home Birth
24 Photos Of Princess Charlotte Making Silly & Cute Faces
20 Amazing Shows With LGBTQ+ Characters To Watch With Your Kids