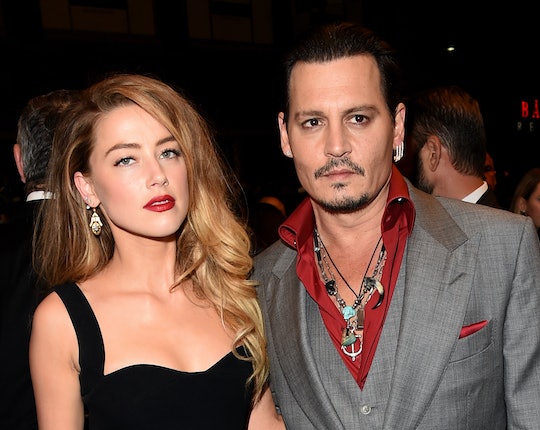 Scrolling through Twitter on a seemingly easy, gorgeous Friday left me disgusted and angry and fearful and self-conscious. These are the devastating emotions a domestic abuse survivor feels after finding out that yet another woman has claimed violence by her partner only to be met with accusations that she's "lying" from the world at large. To be honest, the reactions to Amber Heard's restraining order by people who don't even know her, her situation, or the events surrounding her alleged abuse by husband Johnny Depp say a lot about how we, as a society, view survivors and, perhaps even more importantly, how we view survivors of domestic abuse themselves.

(Romper reached out to Johnny Depp for comment on Heard's allegations but did not immediately hear back.)

I am a domestic abuse survivor, having felt physical and emotional pain at the hands of my father. I stayed silent for the majority of my adolescent and post-adolescent life, afraid that no one would believe me, as many people aren't believing Amber Heard. My father was a respected man in our small community. He went to church every Sunday, and he seemed to give his family every material possession we could ever want. My assailant didn't fit the mold society seems most comfortable attaching to domestic abusers, and even though Amber Heard filed documents alleging that Depp abused her throughout their relationship, apparently neither does Johnny Depp. Depp released a statement about Heard filing for divorce to People via his rep:

Now that Amber Heard has not only filed for divorce but been granted a restraining order against Depp, providing pictures of alleged physical abuse, the internet, Depp fans, and people who clearly don't value the stories and lives and voices of survivors have been quick to denounce Heard's side of the story. In doing so, they're also denouncing the stories of survivors all over the world. Survivors like me.

And in the hours since Heard appeared in a California courtroom, the onslaught of attacks she's endured on social media are attacks I feel personally. Every tweet insisting she's a "liar," that she's just being "manipulative," and that she is anything other than brave and honest is a forced trip back to a past I continue to desperately try to forget every single day.

I am afraid to read the newspaper or turn on the news or check my many social media streams the same way I was afraid every day my father came home from work. Will today be the day something happens? Will today be the day another woman feels pain at the hands of her abuser? Is today the day that a survivor speaks out, only to be ridiculed and denounced and made fun of?

I see the vitriol that is our society's increasingly common reaction to abuse of any kind, and cannot help but see this country as nothing more than a larger version of childhood home: a place riddled with domestic violence that happens so frequently and with no remorse that we're not even surprised anymore when it happens. Our most notable reaction has become our lack of one — it's no longer a question of if it will happen, but when it will happen. I am afraid to read the newspaper or turn on the news or check my many social media streams the same way I was afraid every day my father came home from work. Will today be the day something happens? Will today be the day another woman feels pain at the hands of her abuser? Is today the day that a survivor speaks out, only to be ridiculed and denounced and made fun of?

I read reactions, and I become sad and angry, not just for women who come forward with their allegations like Amber Heard, but mostly I'm sad and angry that I'm not sad and angry enough. I know the road ahead for a domestic abuse survivor. Telling the truth isn't the end — it's the beginning. And now you have to either ignore, face, or fight like hell to overcome what you've been through. Domestic abuse has become such a normal part of our culture that a survivor can't even feign surprise at this point. I am sad and angry that a woman alleging that her partner took physical action against her isn't "shocking" or "surprising" anymore, and I'm sad and angry that I (and countless survivors across the country) are forced to relive our personal traumas over and over again, all while others crack jokes, speculate on what really happened, and hurl insults in our direction with reckless abandon. I'm sad and angry that I can't bring myself to react in a way that situations like these warrant.

But for every disgusting and daunting reaction, there is one that illuminates the people and women fighting to make domestic abuse victims heard and seen. I realize that while many of those speaking out about Amber Heard and her allegations are anything but supportive or kind or anything that a domestic abuse survivor needs, there are others who, well, are.

Yes, the reactions to Amber Heard's restraining order request are extremely telling, but this is a tale we have been told time and time again. No matter how many times we hear this story and become acutely aware that, in this country, we view survivors as liars before we view them as human beings with a story and a voice and a pain that, at times, is unbearable, nothing changes. The reactions continue and the faux shock remains and another new cycle will lapse, leaving Amber Heard and survivors everywhere to pick up the pieces.

But today, I choose to focus on the positive reactions. I choose to see the people who believe victims, the people who give victims a platform to regain their sense of humanity, the people who fight tirelessly to create an environment that makes victims feel safe and secure and worthy of love. I choose to push the reactions that tell me nothing is changing to the back of my mind, along with the memories of an abusive father and the pain he constantly inflicted, and I force myself to see the good. I choose to hear Amber Heard and the millions of others like her. I choose to give her what I so desperately needed so many years ago: a voice.