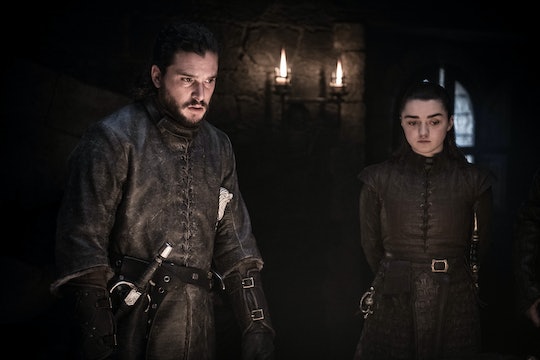 Every battle has a hero and if Arya Stark doesn't win MVP of the Battle of Winterfell, fans will probably riot. Reactions to Arya on Game of Thrones ranged from triumphant to teary as she literally saved humanity by defeating the Night King. The Battle of Winterfell was about as disastrous as predicted, and literally everything that could have gone wrong did: the living were pitifully outnumbered and good lighting did not miraculously befall the penultimate battle of the series.

In the end, the Night King made it all the way to Bran's bait and tackle shop and was on the verge of taking out the three-eyed raven when Arya flying squirreled out of nowhere to pounce on him from behind. In what was probably the most tensely-scored scene since Cersei bombed the Sept of Baylor with wildfire, the Night King spun around just before Arya landed on his back and caught her by the throat. (I don't quite understand how the impact of that landing alone didn't immediately crush her windpipe, but I guess fans were supposed to suspend their disbelief about that.) Just as it seemed the Night King was about to crush the life out of her, Arya dropped the short blade made of dragon glass she was wielding above her head.

Of course, in a move that quickly garnered comparisons to the great plays of sports history, Arya managed to catch the blade in her other hand, which just so happened to be positioned right around the Night King's heart. A little slow motion effect was the cherry on top of this otherwise very satisfying sundae, and Arya triumphantly drove her blade into his chest. All the wights, white walkers, and even the ice dragon fell in unison, with Bran, Jon, Daenerys, Sansa, and Tyrion all in pretty dire circumstances right up until the big finish. Bran (and humanity) was safe, albeit down a few thousand men.

Plenty of fans are already lobbying for Arya to be Queen of the Seven Kingdoms after her massive save, and even though it may just be the adrenaline of battle talking, it doesn't seem like a completely outlandish idea. Jon has said time and again he doesn't want to rule, but as the rightful Targaryen heir to the throne, could he feasibly bestow it upon someone else? I personally think it's more likely Arya becomes head of the Queen's Guard, but viewers still have three episodes left to see where her storyline goes.

Meanwhile, next on the docket is defeating Cersei, and the previews for episode 4 of the final season already show Daenerys itching to descend upon King's Landing. My guess is, Arya's bloodlust isn't quite over yet. After all, Cersei's the most hated person on her ~list~ still living, and I can't imagine a better candidate to execute the Queen and make way for a worthier ruler. Fans get another week to catch their breath and brainstorm last-minute theories before finding out Cersei's fate.