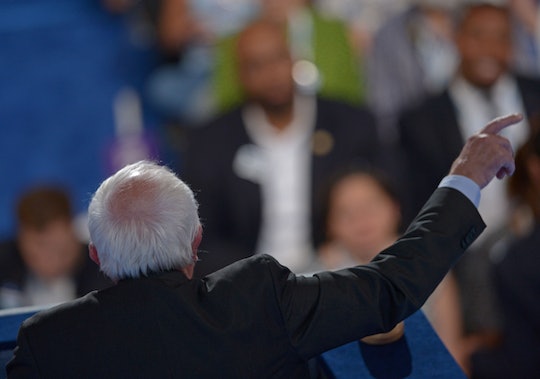 Republicans had the spotlight last week and now it’s the Democrats' turn to welcome Hillary Clinton as their presidential nominee. Monday marks the first day of the Democratic National Convention and plenty of politicians as well as some A-List celebrities are scheduled to speak throughout the week. But the speeches by Lena Dunham of HBO’s Girls or the NBA’s Kareem Abdul-Jabbar weren’t the most hyped. It was Bernie Sander’s DNC speech. Clinton’s former rival, now supporter, headlined the theme of first night — “United Together” — after drawing in loud boos from nearly 2,000 supporters and Democratic delegates after telling the crowds on Monday afternoon, “We have got to elect Hillary Clinton.”

More Like This
Bindi Irwin Has Been Sharing The Cutest Photos Of Her Daughter
Wait, Did The Government Actually Do Something For Parents?
The Bates Family Keeps On Growing: Get To Know All 19 Kids Here
Lisa Kudrow’s Son Used To Say "Mommy!" When He Saw Jennifer Aniston On TV

Even though the Vermont Sen. has given his support and endorsement to Clinton and her VP choice Tim Kaine, Sanders’ diehard supporters still aren't exactly #WithHer.

“We have got to defeat Donald Trump,” Sanders told a group of his delegates in Philadelphia on Monday afternoon. “We have got to elect Hillary Clinton and Tim Kaine.” The audience quickly pounced with boos and screams while continuing to chant, "We want Bernie!" and "Bernie or bust!" Viewers at home and in the Philadelphia arena promptly shared their opinions the social media as Sanders took the stage at the Democratic convention, giving Clinton his final stamp of approval.

Still, despite the fact that Sanders won't be on the ballot this November, the audience and his supporters couldn't get enough of him on Monday evening and applauded for several minutes before he delivered his remarks — and they kept that momentum throughout his entire DNC speech:

Sanders’ speech on Monday followed resignation of Debbie Wasserman Schultz, the head of the Democratic National Committee, after thousands of DNC emails leaked over the weekend that reportedly revealed favoritism for Clinton within the committee during the primaries — something Sanders’ supporters have accused Wasserman Schultz of for months and which made it less likely for him to become the Democratic nominee.

“I told you long time ago that the DNC was not running a fair operation, that they were supporting Secretary Clinton,” Sanders said in an interview ABC News’ George Stephanopoulos Sunday. “So what I suggested to be true six months ago turned out to be true.”

However, on Monday night Sanders’ DNC speech showed that he knew his movement's power would force the DNC's hand for the better. However disappointed his supporters might be tonight, it's a safe bet that they can be proud of the change that Sanders has ushered in.