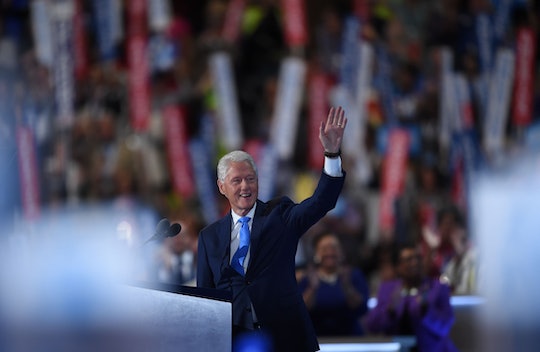 In his 10th convention address on Tuesday night, Bill Clinton was put in an unprecedented position. As a former president endorsing his spouse for the very same job description, there were various tones that he could take. Clinton could have opted for a personal, loving take on his wife's candidacy, or he could have chosen to berate Donald Trump, giving light to the Republican candidate's inconsistencies; He also had the option to focus on neither his wife nor Trump and instead emphasize the policies and key issues that the presumptive Democratic presidential nominee intends to implement if elected. Reactions to Bill Clinton's DNC speech ultimately showed that he was content to steer the conversation toward more personal moments instead — a wise move, all things considered.

The responses to Clinton's presence on the campaign trail have been mixed. On the negative end of things, Clinton engaged in an argument with Black Lives Matter protesters this April in Philadelphia. The protesters criticized Clinton's signing of the 1994 crime bill — a piece of legislation which "paid to put more cops on the beat, trained police and lawyers to investigate domestic violence, imposed tougher prison sentences and provided money for extra prisons," according to NPR's Carrie Johnson.

The former president has since said that signing the bill was a mistake, but his response to the protestors — "you are defending the people who kill the people whose lives you say matter" — came off as aggressive and callous. In a convention where heckling has been the norm, it's likely that Clinton prepared for counter-argument, or at the very least practiced patience in an effort to not appear overly combative.

Thankfully on Tuesday, Clinton's speech focused on the presidential candidate's record of service and refrained from addressing Trump altogether. Clinton addressed his wife's commitment to children's rights, civil rights, and voting rights within the framework of the two's relationship — from their first meek conversation in law school, to Hillary finally accepting his third marriage proposal, to the birth of their daughter. The stadium live at the Democratic National Convention was engaged, laughing with Clinton's lighthearted moments, cheering in support, and withholding all jeers and boos. The internet was open to expressing their admiration for the Clintons' relationship wholeheartedly:

Alluding To (But Not Naming) The Other Candidate

(You Should Really Listen To It If You Haven't)

Ultimately, Clinton used his platform as a way to express admiration for his wife, both on a personal and political level. The ease with which he spoke added honesty to a convention that has been brimming with genuine accounts. His delivery was spoken like a true father, true spouse, and true potential First Gentleman.