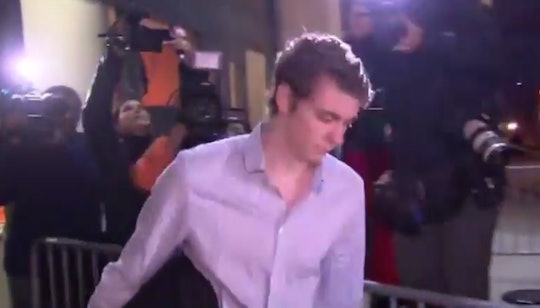 In January 2015, police arrested Turner after two other students caught him sexually assaulting an unconscious woman "behind a dumpster," NBC News reported. Turner plead not guilty, but was charged with three felonies and ultimately convicted on all counts, according to CNN: "assault with intent to commit rape of an intoxicated or unconscious person, penetration of an intoxicated person and penetration of an unconscious person." The prosecution requested that Turner's sentence for sexual assault include six years in prison, NPR reported. Superior Court Judge Aaron Persky opted instead to sentence Turner to six months in jail.

In Turner's letter to Persky published by The Guardian, Turner wrote that he doesn't want to drink alcohol again and that he regrets his actions:

I am the sole proprietor of what happened on the night that these people’s lives were changed forever. I would give anything to change what happened that night. I can never forgive myself for imposing trauma and pain on [redacted]. It debilitates me to think that my actions have caused her emotional and physical stress that is completely unwarranted and unfair.

Persky based Turner's sentence on three factors, according to CNN: that Turner was a first-time offender, that he seemed genuinely remorseful, and that he had been intoxicated at the time. Turner won't return to Stanford, NBC News reported. He'll be on probation for three years and will be a registered sex offender always. But given that Turner could have been sentenced to up to 14 years in prison, there is significant backlash online for both his short sentence and his early release:

Commenters suggested that the tendency for articles to refer to Turner as a "Stanford swimmer" instead of a sexual assailant emphasizes how Turner is already being allowed to move on:

There is also widespread concern that Turner's release may discourage victims of sexual assault from coming forward, and some are doing what they can to remind readers that the focus of attention should be on the victim.

Ultimately, many people want to be sure the world doesn't forget the woman Turner assaulted:

The conversation playing out online raises awareness of the case and sustains discourse surrounding the appropriate legal response to sexual assault. Those who feel Turner's sentence was not fair to the victim are working to ensure the nation remembers this story.