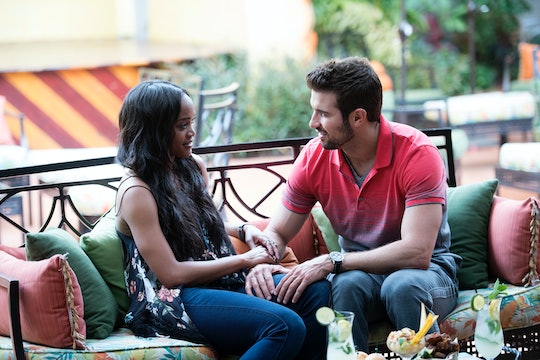 This season of The Bachelorette is going a little too fast for my taste; it's already up to hometown dates! On Monday's episode, Rachel met with the final four's families, but not without a little drama, of course. Bryan told Rachel on a previous episode that he and his ex-girlfriend broke up due to her relationship with his mother, so he was nervous to bring Rachel home to Miami with him. What Bryan's mother thinks means a lot to him, so how would she like Rachel? Reactions to Bryan's mom on The Bachelorette prove how intense she is about her son.

Rachel (and Bryan) were pretty nervous from the jump to meet his family — especially his mother, Olga — because of how Bryan's last relationship ended. Apparently, when Bryan brought her home, she and Olga didn't hit it off. This affected Bryan's relationship so much that they broke up, and Olga was a big reason why. It makes sense, then, why Rachel was hesitant to meet Bryan's family. It's obvious she and him have a lot of chemistry, but that doesn't mean his family would love her as much as Bryan does (and he revealed his feelings at the end of the date).

So, after "meeting the parents" with his ex resulted in disaster, how was Rachel's encounter with Olga? Well, she definitely wasn't as warm as Eric's family. She was a bit standoffish at first, and seemed to down her wine glass in one go. Fans on Twitter immediately had their own takes on Olga:

After the wine moment (which, to be fair, was pretty relatable), Olga talked to Rachel more about her expectations. She said if Rachel marries Bryan, she's marrying his family too. Even though Bryan is her 37 years old son, Olga considers him the love of her life. "If he's happy, I'm happy," Olga told Rachel. "But if not, I'll kill you." They both shared a laugh... but it's unclear whether Olga was actually kidding.

It's safe to say that Olga is intense, but obviously has a lot of love for her son and wants the best for him. This may factor in Rachel's decision later on, but for now she's probably still secure in her feelings for him (or, at least, she just wants to get him in the fantasy suite). For now, though, Bachelor Nation can bond over how extra Bryan's mother is.