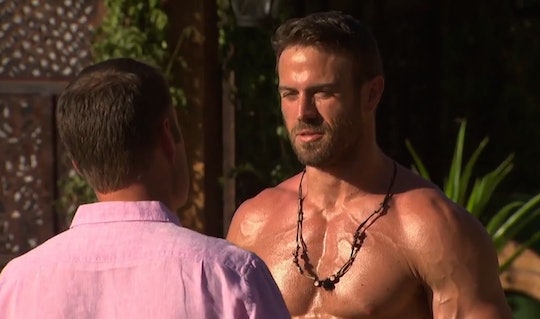 Reactions To Chad's Milk Comment On 'The Bachelorette' Are Liquid Gold

It's been hard to find a redeeming quality about The Bachelorette's Chad. He's arrogant, abrasive, and has a habit of verbally attacking his housemates (and has even gotten physical with one of them.) But tonight, Chad got a chuckle out of me with a one-off comment about a beloved beverage. And, if the social media reactions to Chad's milk comment on The Bachelorette are any indication, then the rest of the world agrees with me.

The comment arose during one of Chad's tamer altercations with fellow contests Alex. The two had neared the end of a two-on-one date with Jo Jo, during which time Alex told Jo Jo about Chad's attacks on the other housemates earlier that day. Unhappy that a competitor was bad mouthing him yet again, Chad confronted Alex and dropped the parental "I'm not mad, I'm just disappointed."

A relatively calm Chad tried to rationalize the situation by reminding the world that "life ain't all blueberries and paper airplanes." (Yeah, no kidding bro.) But the calm didn't last too long. Alex took the opportunity to tell Chad off, saying that he initially thought the two would be close due to their military background. But, as Alex said, he lost all respect for Chad during the Sport's Nation date when he called Jo Jo a nag.

Naturally, Chad's response was to tell Alex that he needed to "have a glass of milk" and chill out. And when Alex said he didn't like milk, Chad came back with a simple "you should. Milk's delicious."

Say what you want about Chad, but the man knows the importance of calcium. And he knows just when to preach about it. Needless to say, that exchange got the Twitter-verse finally talking about Chad in a good way.

Many agreed with his sentiments

Some used the comment as a stepping stone for their own jokes.

Though there some that may not be happy with Chad's comments.

But the question remains, how does Chad feel about soy milk?