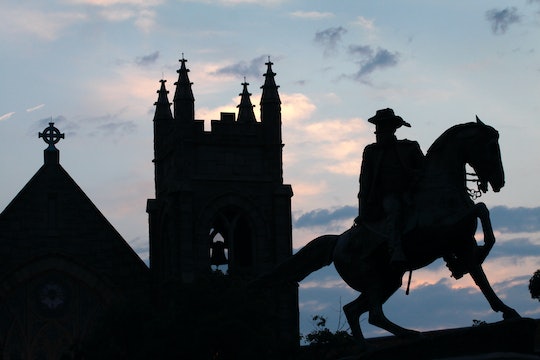 It's hard to believe that, in 2017, state governments would still choose to celebrate a holiday memorializing the fact that their ancestors fought to protect slavery. Yet according to CNN, April 24 marks Confederate Memorial Day in both Mississippi and Alabama, a day meant to commemorate those who died fighting for the South during the Civil War. State government offices in the two states will be closed for the holiday, but thanks to the legacy of racism and white supremacy that has often been tied to both the Civil War and the Confederate flag, it's not exactly surprising that reactions to Confederate Memorial Day show that, to many people, continuing to recognize the day as a holiday is considered racist and totally offensive.

Of course, the validity of the holiday, and the meaning of the Confederate flag, is something that is often hotly-debated, and many people in southern states continue to argue that, to them, the flag is a symbol of their heritage, and has nothing to do with racism. In 2011, a Charleston, South Carolina, woman Annie Chambers Caddell made headlines when her insistence upon proudly flying a Confederate flag in her front yard led to her neighbors erecting a tall fence on both sides, according to The Charleston Post and Courier. But Caddell — a self-proclaimed "daughter of the South" — said that taking the Confederate flag down would be akin to "[letting her] family history die," according to The Huffington Post.

That might seem to some like a fair argument to make, and Caddell may very well believe she has sincere motivation. The obvious problem though, is that no matter how sincere you are about believing in honoring your heritage and your state's fallen soldiers, putting up Confederate flags in your yard and proudly celebrating Confederate Memorial Day inevitably means that you're forcing others to bear witness to a symbol that has long been associated with white supremacy. And there's good reason for that connection: according to the Civil War Trust, the war was specifically fought over the decision of 11 southern states to leave the United States due to fears over the North's desire to abolish slavery throughout the country. In fact, a number of states discussed protecting slavery as a reason for wanting to separate, according to The Huffington Post, with Mississippi's declaration of secession from the United States even explicitly saying that “a blow at slavery is a blow at commerce and civilization."

The South obviously didn't win the war, but the Confederate flag — a version of its one-time battle flag — lived on, and was eventually co-opted by a number of different groups who saw it as a symbol of their desire for racial segregation. Those groups included the Dixiecrats in the 1940s, a political party that opposed President Harry Truman’s proposed anti-lynching laws, according to The Huffington Post, as well as the Klu Klux Klan. And, according to the Anti-Defamation League, the Confederate flag remains a popular symbol of white supremacists in the United States and around the world, leading it to be classified by the ADL as a "general hate symbol."

In other words, no matter how much the Confederate flag and Confederate Memorial Day might represent southern heritage and honoring fallen soldiers to some, it doesn't in any way negate that it's still an offensive, racist holiday to celebrate. And the fact that it continues to exist in some areas of the country is totally concerning, and honestly, pretty baffling.

In Georgia, a state that also observed Confederate Memorial Day until 2015, state government offices will still be closed, and many people will still be given the day off. But at the very least, the day will no longer officially be tied to the Civil War or the Confederate flag: according to The Atlanta Journal-Constitution, Georgia Gov. Nathan Deal opted to strike both Confederate Memorial Day and Robert E. Lee’s birthday from the state’s official holiday calendar following the mass shooting that year where Dylann Roof allegedly killed nine black people as part of a white supremacist plot in a Charleston, South Carolina church. At the time, Deal said that the move was meant to “show that we are a state that has come a very long way.” The holiday's new name? Uh, literally, "State Holiday."

Given the fact that debate over Confederate Memorial Day even exists, it's not at all surprising that plenty of people were expressing their outrage and frustration on social media today. Because, honestly, why is this even still a thing?

The good news, at least, is that April 24 will now represent an important milestone in New Orleans, according to NBC News. Early Monday, the city finally began removing the Liberty Monument, an 1891 tribute to the Crescent City White League, and the first of four prominent Confederate monuments scheduled to be taken down. Yet, even that decision was controversial — officials said that supporters of the monument have made death threats, and workers inspecting the monument were required to wear flak jackets and helmets. In 2017.

The very existence of Confederate Memorial Day is a beyond frustrating to many Americans, for whom the day, and the flag represent a shameful aspect of their country's history (not to mention the fact that support for the Confederacy often continues to be shorthand for racism, even today). Yet with two states still commemorating the day (and one state, well, not necessarily not commemorating it), it's clear that continue to push back against these discriminatory historical ideas is very much needed.