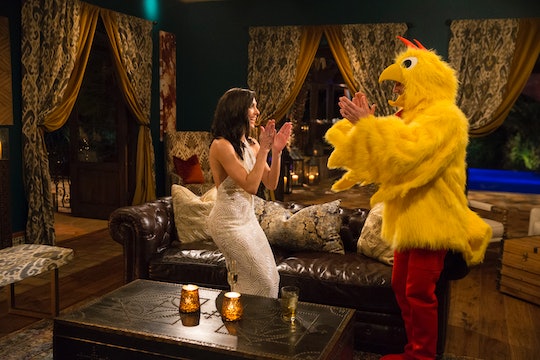 Well, it was bound to happen: a contestant introduced himself to the new Bachelorette, Becca, in an animal suit. Similar to dolphins and penguins before him, suitor David decided to waltz out of the limo dressed as a chicken. Reactions to David's chicken suit on The Bachelorette were a lot more clever than the actual move — and some fans were even pairing up David and Alexis, who wore the infamous "dolphin" (left shark) costume.

Okay, who is David, anyway? It's pretty hard to distinguish yourself amongst a sea of men, so the chicken suit actually does help. According to his ABC biography, David is a venture capitalist from Denver, Colorado... which I suppose means he can easily afford that chicken suit. In fact, David is apparently rich. The bio says he's a VC and a "successful businessman," but in a video interview with Ashley I. he confirmed that he owns a private firm (so, yeah, "successful" sounds right). David's titles are super vague, especially to those unfamiliar with the financial terms, but it seems the industry has paid dividends (pun intended) for David.

In the interview with Ashley, she commented that he's allowed to take so much time off work for the show because he runs the firm. Evidently, the show wouldn't mess with the firm's profits too much. Beyond work, David apparently "enjoys fitness, golfing, skiing and spending time with his family at their beach house. He loves guacamole, but hates avocado. Hopefully, that's not a deal breaker for the Bachelorette!"

David is also active on Instagram, and judging by his photos he definitely likes going on adventures (like to the Super Bowl). But, for some reason, he instead decided to focus on his... love of poultry? to meet Becca for the first time. David is certainly not the first contestant to pull a stunt like this. Who could forget Alexis from Nick's season, who was wearing the left shark costume but insisting she was dressed like a dolphin? Or Matt from Rachel's season, who showed up wearing a penguin costume — and actually ended up going pretty far in the competition? dressing up like an animal certainly doesn't set people up for failure off the bat, but it does give a weird first impression.

Twitter, of course, also felt that weirdness and didn't hesitate to express their feelings:

As it turns out, though, David isn't the first person in Bachelor Nation to bring up chickens right away. On Ben Higgins' season of The Bachelor, contestant Tiara regarded herself as a "chicken enthusiast." Indeed, Tiara not only had photos of chickens strewn about her home, but she has them as pets. They rested on her shoulder, even during her morning routine!

Tiara didn't get a rose from Ben that season, but David actually did receive a rose from the first ceremony. Other contestants who didn't make it through were shocked that a chicken won out, but some viewers saw what Becca saw:

Luckily, fans who were into David-the-chicken will have a chance to see him again, at least in the next episode. It's unknown how far he'll go at this point, but it seemed that the silliness of the chicken suit turned Becca off. At this point, it'll be all about David the person and his chemistry with Becca. Alexis and Mark lasted several weeks on the show, so that may be a good indicator of how David's "journey" on the show will end up. But who knows, perhaps David is the one who wins Becca's heart! Only time will tell.