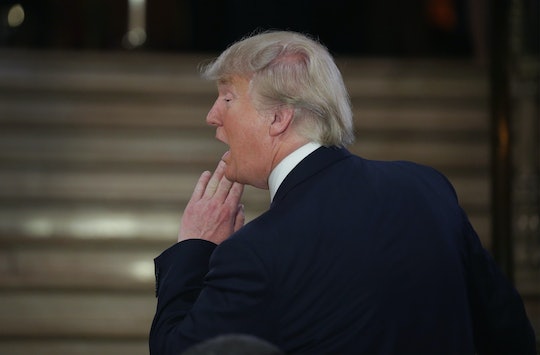 Reactions To Donald Trump's Abraham Lincoln Comment Are Everything You Expect

The most consistent thing about Republican nominee Donald Trump is that he's always bound to say something ridiculous every time he speaks. This is one of the reasons his supporters love him and the main reason others are either amused or scared by him. On Saturday in Detroit, Donald Trump evoked Lincoln and the reactions to Donald Trump's Abraham Lincoln comment are pretty much perfect. On Saturday, Trump spoke at Great Faith Ministries, the first AfricanAmerican church that he's visited during his campaign. The idea was to woo some black voters, since according to polls he has about 1 percent of the African American vote.

To get their attention, Trump said that he wanted to follow in Lincoln's footsteps. "It is on his legacy that I hope to build the future of the party, but more importantly, the future of the country," he said. He added that not many people know that Abraham Lincoln was a Republican. Cue the jokes about Trump just learning that himself. Trump said that he wanted to work not just on uniting his party, but America. "Our nation is too divided. We talk past each other, not to each other, and those who seek office do not do enough to step into the community and learn what is going on," he said. All of this was joke worthy to the social media crowd, as one might imagine.

History buffs and haters jumped on his comments.

It's funny because, well, most everyone knows that Abraham Lincoln was a Republican. But that's not exactly the same kind of Republican party that Donald Trump is heading up. President Obama also often evokes Lincoln, because Lincoln wanted to bring people together. Lincoln once said that America was great because it didn't adhere to "dogmas of the quiet past," which is something that many Trump supporters sort of do — just by saying that they want to make America great "again," sort of implies that. So Trump doesn't really understand Lincoln's legacy at all and he most certainly doesn't understand African Americans if he thinks that many of them "don't know" that Lincoln was a Republican. It's sort of embarrassing for the candidate all around. And black voters don't seem to be buying it.

But they, in the spirit of Lincoln, seemed to be into hearing what the man had to say. One voter Charnell Williams told Politico, “I think it could be a good thing. Maybe he will have something good to say?” Who knows how Williams felt by the time he was finished with his remarks.