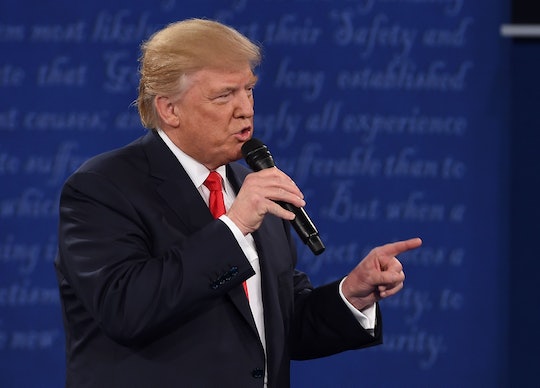 There have been a lot of things to laugh about during the 2016 election season. Time Kaine's eyebrows, Mike Pence's villainous doppelgängers, Hillary Clinton's shimmy, to name a few. But the most laughable moment of the road to the White House came during Sunday night's debate when Donald Tump said, "I'm a gentleman." It was such a comical statement that the entire audience exploded with laughter.

It shouldn't come as a surprise that Trump made such an outrageous and inaccurate claim. Heck, there are teams around the country devoted to fact-checking Trump during the debates and throughout the campaign. But the Republican nominee's claim to being some sort of chivalrous being is especially ironic given the events that occurred days prior to the second presidential debate. On Friday afternoon, The Washington Post leaked a video that featured Trump making crude comments about women to Billy Bush, who was then the host of Access Hollywood. In the video, which was recorded in 2005, talked about forcing himself on women and using his "celebrity status" to get women to do whatever he wanted.

"I'm automatically attracted to beautiful women — I just start kissing them, it's like a magnet," he said, according to NBC. "I don't even wait. And when you're a star, they let you do it. You can do anything… Grab 'em by the p*ssy."

Friday's tape wasn't the first example of Trump being disrespectful to women — and people in general. Even during Sunday's debate, he made many sexist and racists claims that would make anyone shake their head. So when he claimed to be a gentleman, it was only natural for the audience to laugh out loud.

The comment came after an audience member asked a question about Obama Care, and moderator Anderson Cooper said it was Clinton's turn to go first. The nominees went back and forth on who should go first when Clinton finally said, "No, go ahead Donald." Trump, being Trump, responded by saying "No I'm a gentleman, Hillary, go ahead."

But the people at St. Louis, Missouri's Washington University weren't the only ones who were in on the joke. People at home were quick to react to Trump gentleman claim via social media.

Some reacted with confusion.

Others, of course, responded with GIFable eye rolls and head shakes.

Others questioned if Trump knew what the word meant.

Many brought up examples of Trump being anything but a gentleman.

Though Trump's comments about women, immigrants, and Clinton are no laughing matter (and anything but gentleman-like), his claim that he is chivalrous is definitely worthy of a few giggles. Or at least an LOL.