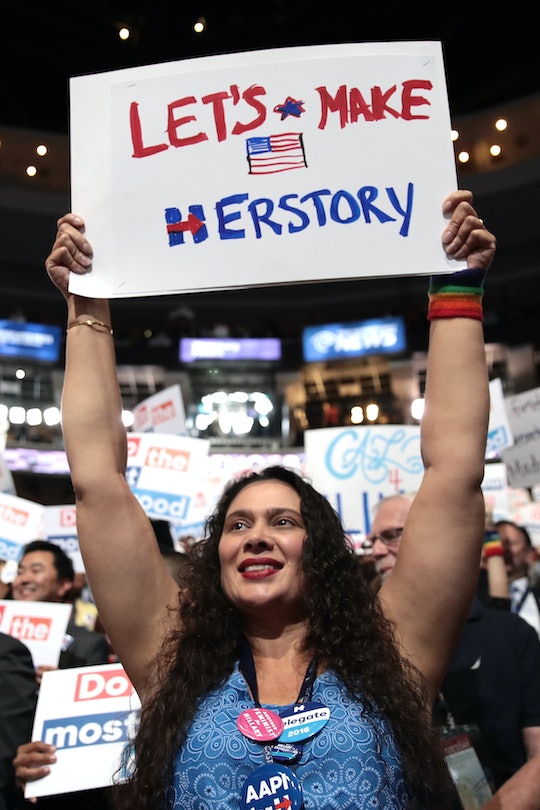 Tonight, cheers erupted in Philadelphia. Tonight, we watched Bernie Sanders call for a nomination by acclamation to the tear-filled eyes of his supporters. Tonight, Hillary Clinton became the first female presidential candidate of a major party, and our country's currently a mixture of "after all this time!" and "what took us so long?" Reactions to Hillary Clinton becoming the democratic nominee show that our nation is more than ready for a female commander-in-chief to shatter glass ceilings and empower future, young female leaders.

As echoed throughout the convention: When women succeed, America succeeds. Though not all Dems are thrilled (sorry, #Bernieorbust), many are still able to acknowledge just how remarkable this nomination is. Though the primaries were laden with negativity, fear mongering, and exclusivity, the Democratic National Convention has opened its stage to voices of varied ages, races, and abilities--a stark contrast to last week's Republican National Convention. Despite the Sanders rebellion that continues to persist despite his own condemnation of it, those remaining within the democratic party are ecstatic at the possibility of a female president, singing the democratic party's praises.

Below are some tweets summing up different responses to Clinton's candidacy. They range from joyful to upset to content, but they all recognize this occasion's significance.

Some Are Ready For It

Some Are Just Ready To Walk Out

Some Are Putting Gender Identity Aside

It's Herstory In The Making

Though plenty, unwavering supporters are rejoicing, the ultimate success of Clinton's candidacy within the democratic party is unclear. As the party is not unanimously thrilled with Clinton, it's possible that former Sanders voters will hop to Trump or prefer Green Party candidate Jill Stein. A CNN poll on Monday showed that third party candidates may garner a combined 12-percent — a very significant portion of the vote made more so when the projected difference between Trump and Clinton is fewer than five percentage points.

The final two days of the DNC will be vital for Clinton's campaign. Whereas the RNC had its share of drama on the convention stage, the DNC's controversy has been kept outside of the arena (think e-mail scandal, Sanders supporters' walk out). Clinton's final, acceptance speech on Thursday night must pack the same, strong, angelic punch that Michelle Obama's did on the convention's opening night — one that strikes a genuine chord with voters on the convention floor as well as those voters streaming the speech from their couch.