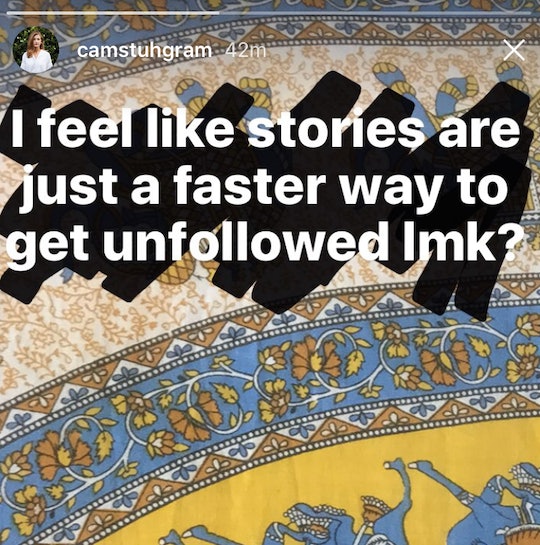 Reactions To Instagram Stories Show Users Are Not Exactly Pleased

My Instagram app self-updated this morning and I thought nothing of it. I opened it a bit later to see a new, top row of icons, the first being Instagram's own, flashing and boasting "New!" I tapped it to try and make it go away but instead was shown the video "Introducing Instagram Stories." It felt like I was watching someone's Snapchat, but one that was maybe taken on an Android, with its camera quality a bit off and the font's kinda weird (sorry for the Android shade). Reactions to Instagram Stories show that plenty others are sensing the Snapchat/Insta similarities and, as patrons of the internet often do, are getting pretty angry about it.

I found very few differences between the two apps. First off, the slideshow of instant images are called "My Story" and they "disappear" after 24 hours. You can draw and add text in a similar interface. At present, Instagram Stories don't have "face filters, geofilters, time stamps, or weather and speed gauges," though there's speculation that they will soon. The posts don't have likes or comments like regular IG posts do, but you can swipe up in order to see who has viewed your story.

This attempt to get people posting more on Instagram has not been well-received by frequent Insta users. As it often goes, when an app or interface changes, people are adamantly against it, hoping that the brand in question might hear them and go back to how things were before. But truly, when has that ever worked? Remember Insta's algorithm uproar that happened not too long ago? Despite how upset users were and how Instagram's growth was the lowest it's been in awhile, the algorithm remains. I now find myself liking fewer pics of acquaintances because, sure, your trip to Greece with your girlfriend seems awesome but if I "like" it, will you then take priority in my feed over the @sadanimalfacts cartoons and posts that I don't throw likes at but definitely do enjoy? Can't risk it.

Here's a roundup of how people are feeling: Some open to change, some slighted, others ambivalent, and some who just are flat-out mad.

Snapchat and Instagram are meant for entirely different things. Instagram is curated and hand-selected; To post too frequently is annoying, too little and you're forgotten. Snapchats are location-based, are less artful, and you can even vlog most of your day without bothering people too much. A follower/following ratio isn't advertised on any sort of profile and accounts can stay private, so there are fewer reasons to be as selective about who you interact with on Snap as opposed to IG.

When Snapchat Memories started saving old snaps, it went against the temporary principle that the app was built on. Similarly, the selectiveness that Instagram was created with seems to have fallen by the wayside, too.