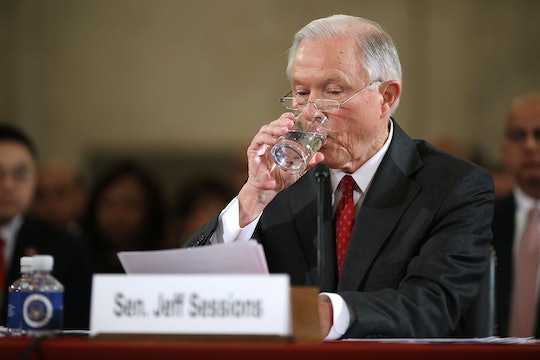 On Wednesday night, the Senate confirmed Jeff Sessions's appointment as attorney general. But the reactions to Jeff Sessions' confirmation show that the fight is far from over. As was the case during his confirmation hearings, it seems the Alabama senator really has a way of dividing people.

More Like This
Bindi Irwin Has Been Sharing The Cutest Photos Of Her Daughter
Wait, Did The Government Actually Do Something For Parents?
The Bates Family Keeps On Growing: Get To Know All 19 Kids Here
A Volleyball Coach Wasn’t Allowed To Bring Her Breastfeeding Baby Into A Tournament

The confirmation hearings were hard to get through, coming to a head on Tuesday night with Massachussetts Sen. Elizabeth Warren being banned by Senate Majority Leader Mitch McConnell, under the obscure Rule 19, for trying to read a 1986 letter written by Coretta Scott King. The letter laid out most of the reasons Democrats were against confirming Sessions — namely for prosecuting a man who tried to help African Americans vote. He has also allegedly disparaged the American Civil Liberties Union and the NAACP as "un-American" in the past, even though they are the two most important watchdogs when it comes to American civil rights.

A lot of politicians hold very offensive, often racist or misogynist views, but it was the fact that Sessions was up for the attorney general gig — essentially acting as America's highest law enforcement officer — that riled many Democrats and activists. To put someone like Sessions, who has often took a stance against civil and voting rights, in charge of protecting them is controversial. And a little scary to some people.

... And Are Even More Upset With A Fellow Democrat

Despite the controversy, it was pretty much guaranteed that Sessions would be confirmed, along with all the other Trump nominees, since there aren't enough Democrats in the Senate to win, ever. It's near impossible to veto a nominee, even if they try to get Republicans to vote along Democrat party lines. It's even tougher when when there are Democrats, like on Wednesday night, who vote against their party (and in some peoples' opinions, their country). West Virginia Sen. Joe Manchin was the only Democrat to vote for Sessions and Sessions himself sat the vote out.

Warren told CNN early Wednesday that she was prepared for the outcome. "We may not have the votes to stop [the nominees], but we sure as hell need to make it clear to the Republicans and to the American people exactly who Donald Trump is putting in charge of our government," she said.

But Republicans seem to think that Sessions is a swell guy and think Democrats are just being sore losers. Iowa Sen. Chuck Grassley told The Washington Post, "It’s no secret that our Democrat colleagues don’t like the new president and are doing what they can to undermine the new administration."

Let's just hope that the Republican senators are right about Sessions and that he'll protect the rights of Americans — not just agree to help Trump build a Mexican border wall, institute a travel ban, or block anyone's right to vote, anywhere.