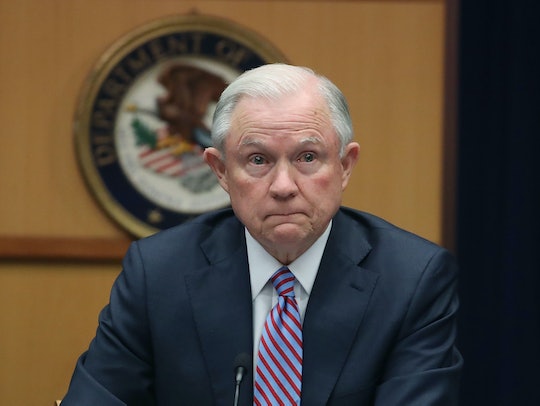 If you're the Attorney General of the United States, it's probably not a good idea to minimize and disrespect one of those states on talk radio. Reactions to Jeff Sessions' "island in the Pacific" comment were swift and harsh, but apparently he still hasn't learned his lesson, because when CNN's Kate Bolduan gave him every opportunity to apologize, he declined. Sessions was discussing Judge Derrick Watson's order blocking President Donald Trump's travel ban on The Mark Levin Show on Tuesday when he said, "I really am amazed that a judge sitting on an island in the Pacific can issue an order that stops the President of the United States from what appears to be clearly his statutory and Constitutional power."

When Bolduan asked Sessions if he thought he'd disrespected the judge or the state, he responded, "No, I think the island is a fabulous place ... I was just raising the point of that issue of a single judge." Sessions still failed to acknowledge that "the island" is part of America, a bad look for someone whose track record on race is already closely scrutinized. Of course, if he can get confirmed after calling the NAACP un-American and reportedly only taking issue with the Ku Klux Klan after they found out they smoked pot, according to The Washington Post, he's pretty much bulletproof. Sessions hasn't responded to Romper's requests for comment on those previous statements.

But even if he's won't listen to his critics, that doesn't mean they're not still talking. Hawaiian lawmakers are furious, and all four of the state's members of Congress took the opportunity to weigh in (some of them in a series of escalating tweets).

Citizens are equally offended. Some Hawaiians took Sessions' comments personally, and rightfully so. Many were quick to remind the Attorney General about a pretty damn significant event in U.S. history that occurred in Hawaii — maybe you've heard of a place called Pearl Harbor?

And some recalled that this wasn't the first time Hawaii was treated like the forgotten cousin of the states. It gave us our last president, and this is how we thank it? Or perhaps that's part of Sessions' beef, who knows?

Residents of other states were quick to join their voices in solidarity. It's good to know that some people still remember what the "U" in U.S.A. stands for.

And of course, we've got jokes. Righteous indignation is fine and good, but sometimes, we need a laugh, right?

No amount of scorn is going to change Sessions at this point, so perhaps it's best to just sit back and laugh about what a mess America's gotten itself into.