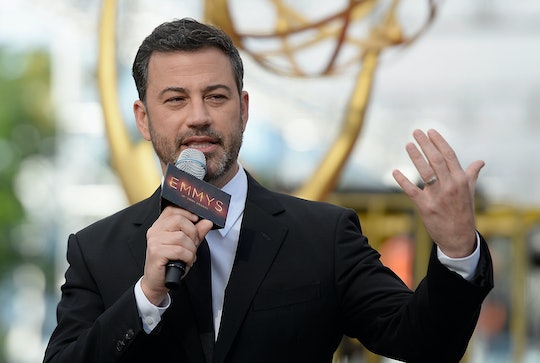 The biggest night in television history is finally here! It's the 68th Primetime Emmy Awards and everyone who's anyone on TV is at the show. This year Jimmy Kimmel is leading the award show as host and his opening montage and monologue make it clear it'll be a funny night. Beginning with a celeb filled video that including the cast of Modern Family, Veep, and James Corden, with a special appearance by Jeb Bush, Kimmel already had viewers laughing. Then his monologue had the audience in the Microsoft Theatre in Los Angeles and the viewers at home cracking up. Naturally viewers took to Twitter to let their reactions to Kimmel's 2016 Emmys opener and monologue be known.

Fans of Kimmel's late night talk show weren't at all surprised that Kimmel's opener and monologue knocked it out of the park, but others were happily surprised. Though a lot of people seem to have enjoyed Kimmel's opening, others weren't all that impressed by it. For those viewers, perhaps the jokes will get better as the night goes on. Overall, though, it seems Kimmel is doing a great job as host this year and we can probably expect even more surprises throughout the rest of the night from him. For now all people can talk about is his opening video and monologue. Here are some of the best fan and critic reactions viewers had to Kimmel's 2016 Emmys opener and monologue.

Almost everyone was happily surprised to see Bush show up to drive in Kimmel's opener as the limo driver for Veep star Julia Louis-Dreyfus, while others were concerned with his job prospects. Both celebs in the audience and viewers at home seemed a little unsure about Kimmel's O.J. Simpson jokes but Kimmel rolled right on through it and seemed to pull it off. His cracks at Maggie Smith, who's been nominated for an Emmy nine times but has never come to the show, wasn't too popularly received by Harry Potter fans. Smith played the lovable Professor McGonagall in the films and though that has nothing to do with any of her Emmy nominations, Harry Potter fans were not pleased anyway.

Still, Kimmel knocked it out of the park tonight and started the Emmys on the right foot and it'll be great to see what he has planned for the rest of the night.