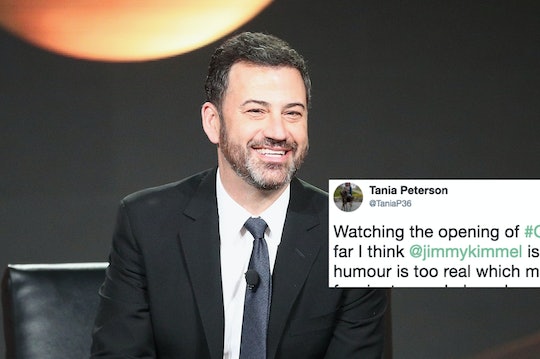 Jimmy Kimmel stepped on stage as the host of the Academy Awards for the second time on Sunday March 4, and he started off the evening on a positive note. Reactions to Jimmy Kimmel's Oscars opening monologue on social media made it clear that some viewers responded to his humor, but others criticized the show having a white cis male host. Twitter is Twitter, so there were quite a few divergent opinions on Kimmel's introductory statements.

Kimmel had navigated some unexpected moments during his first time hosting the Oscars, like the Best Picture twist that cropped up at the end of the night and erroneously awarded La La Land the win that Moonlight had actually earned. He wasn't opposed to some more shocks and surprises either, telling Entertainment Weekly ahead of the big night, "I don't want this show to go exactly as planned. There have to be surprises, there have to be notable moments [...]."

Basically, if someone took a flop on stage or said something eyebrow-raising, Kimmel would be on board. He was ready to field any issue that arose. In the same interview, he also mentioned that his plan for the opening monologue was to touch on a few different subjects but not linger too long on anything. He didn't want to wear out his welcome, after all. These reactions from the viewers prove that he was successful, but there's always room for improvement.

Kimmel opened the show with a throwback bit that showed the current nominees in grainy black and white, with Kimmel providing voiceover like a radio announcer from decades past. That transitioned into a monologue about how historic and important this year's ceremony was as the 90th in Oscar history, as well as comments on the current state of Hollywood. While gesturing to the gold statue of the Oscar, Kimmel remarked that he (Oscar, that is) was the most beloved and respected man in Hollywood because he never said a rude word and kept his hands to himself. According to Kimmel, they needed more men like Oscar.

Kimmel also took time to discuss the #MeToo movement and the sexual assault allegations in Hollywood, as well as Harvey Weinstein's expulsion from the Academy. He pointed out that the only other person to be kicked out of the Academy was Carmine Caridi, for sharing screeners of the nominated films. Kimmel remarked on the absurdity of both men receiving the same punishment for such vastly different reasons.

Many viewers on Twitter appreciated Kimmel's opening monologue for addressing relevant issues while keeping things light and positive as was traditional with an award show introduction. He talked about the wage gap between women as men, specifically in reference to Mark Wahlberg being paid more than Michelle Williams for reshoots on All the Money in the World. Kimmel's opener had quite a few jokes about the difficulties of being a woman in Hollywood.

And that was the very reason some Twitter users took issue with Kimmel as a host. It wasn't that he was a bad host or that he wasn't doing a serviceable job starting the night off, it was that he was a white cis man talking about how hard things could be for women and people of color. Those things should be talked about, but perhaps having a host who had firsthand experience with the issues at hand might have had more impact.

Criticism over the lack of diversity in award show hosts is warranted, though Kimmel has handled himself well during the two times he hosted the Oscars, and it's good that his opening monologue didn't gloss over important issues.