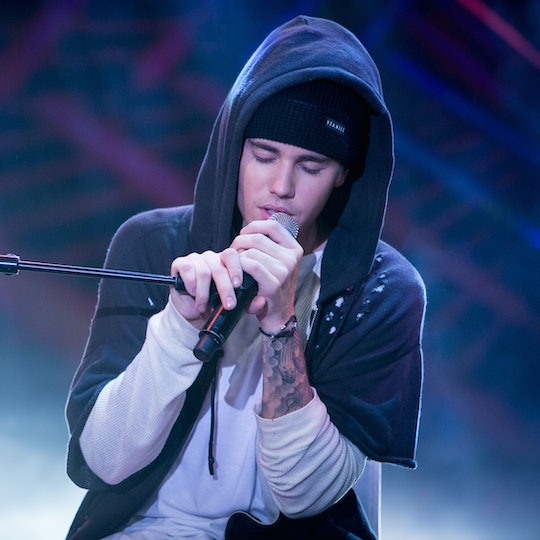 Reactions To Justin Bieber's 'I'll Show You' Are Intense

Want a softer side of The Biebs? You got it. The singer released his latest song Sunday, and if the reactions to Justin Bieber's "I'll Show You" are any indication, the Internet is losing it's mind. The single went live after a full day of teasers on Twitter, complete with video clips and some anticipatory “not long now” tweets from Bieber to all of his 69 million followers. “I’ll Show You” is the third new track to be released from his upcoming new album, Purpose — the first two singles, “Sorry” and “What Do You Mean” are already big hits — and judging by the lyrics, the new song is Bieber’s way of hitting back at his critics, with lines like “my life is a movie and everyone’s watching. They forget that I’m human, they forget that I’m real.” (Take that, haters).

Bieber may have encountered his share of scandal and criticism over the past few years (peeing in a bucket, anyone?), but judging by the reaction to his new song, his fans are there for him more than ever, and they’re super proud that he’s speaking his truth. And maybe they’re also losing it a little with this super emotional song — but who can blame them? Hearing Bieber bare his soul is hitting us all right in the feels.

But as much as people are loving the message of the song, they're also totally swooning over his singing, specifically at the end, when Bieber picks back up to harmonize with, uh, himself. Beautiful, vocal perfection:

The release date for Purpose might still be an agonizing 11 days away, but judging by all the love it's been getting so far, it's probably safe to say the Beliebers are going to make sure it's a huge hit.