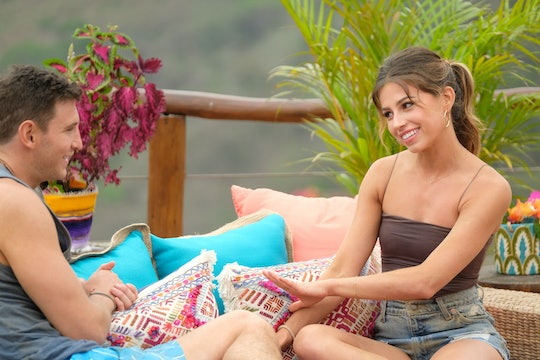 Kristina Schulman is a Bachelor in Paradise veteran at this point, so it's no surprise that, after getting so badly burned by Dean two summers ago, she has returned to dominate this season. The 26-year-old Bachelor alum from Nick Viall's season has already proven that she isn't above asking people (read: Blake) out on dates just to skewer them for their bad past behavior. But she also isn't above lobbying coupled up folks (read: Blake) for a so-called friendship rose. And reactions to Kristina and Caitlin's fight over Blake on Bachelor in Paradise suggest that she may be veering a little too far into Mad Queen territory.

To her credit, Caitlin spotted Kristina angling for Blake's friendship rose right away. And after hitting it off with Blake, Caitlin wanted to make sure Kristina knew that she was pursuing him with legitimate romantic intentions. Unfortunately, she went through Caelynn — who's been vilifying Kristina behind the scenes all season — first. Kristina saw Caitlin talking to her nemesis and immediately went on the defensive when confronted about Blake.

Although it's true that there's nothing wrong with Kristina hustling her way into a friendship rose, especially after the summer she has had, it makes sense that someone who wants to pursue Blake for ~the right reasons~ would feel a little put out by it. Kristina also has no problem standing her ground and defending her position, which left Caitlin feeling attacked.

Earlier this week, Blake got his heart crushed — most say deservingly — when Hannah G. chose to give her rose to Dylan. The rest of the beach was relieved; after all, Dylan had been there for Hannah since day one and Blake hooked up with half the cast at Stagecoach. It seemed like Blake was going home for sure when Kristina decided to spare him at the last minute by offering him her rose. But in a confessional interview, she revealed that she only did it to torture him by forcing Blake to stay and watch Hannah's relationship blossom.

Twitter was happy to christen Kristina an evil genius for the move, and it wasn't her only moment of masterful manipulation. Right after she first arrived on the beach, she gave Blake her date card, only to grill him about sleeping with her and Caelynn 24 hours apart at Stagecoach. Again, it was sort of a brilliant revenge plot. But purposefully trying to torpedo Blake and Caitlin's relationship — just so she can get a platonic rose from him and stick around another week — seems to be where Twitter draws the line.

It looks like the combination of Kristina's shady intentions and her getting super defensive about them with Caitlin is simply a bridge too far for Bachelor fans. Although they've been cheering Kristina on for most of the season, it's starting to seem like she's manipulating for manipulation's sake, instead of legitimately trying to find connections. You can tune in to see whether she manages to course-correct this season when Bachelor in Paradise airs Monday and Tuesday nights at 8 p.m. ET on ABC.