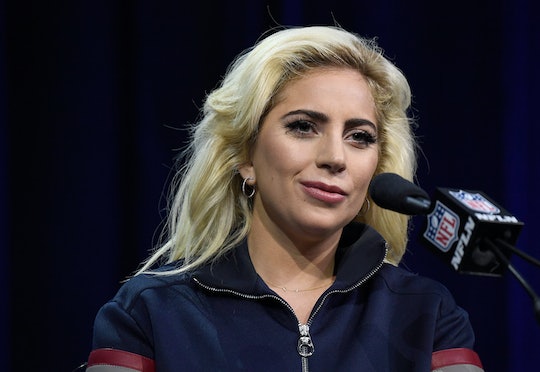 Gaga's 'This Land Is Your Land' Tribute Is Perfect

The Super Bowl halftime show, in recent years, has tried to move away from its dad rock acts of yore in favor of showcasing blockbuster female pop stars. Last year's red glitter pantsuit (and matching eye shadow) clad Super Bowl national anthem chanteuse Lady Gaga got a promotion for 2017, and took the stage as the halftime headliner for the New England Patriots and Atlanta Falcons game. Rumors flew wild in anticipation (and anxiety) of her performance, considering her penchant for bold political statements and the NFL's general stress over them. But reactions to Lady Gaga's "This Land Is Your Land" Super Bowl moment included both appreciation from unity-seekers and critically nuanced takes from people of color.

In the weeks leading up to the halftime show, there was speculation about everything from whether or not Beyoncé would appear for the third time in four years to whether Lady Gaga would deploy drones to achieve her vision of dropping in from the roof of Houston's NRG Stadium in order to give her entire performance "hovering above the stadium floor." A few details were confirmed, however, like that Tony Bennett would give a pre-taped video introduction of Gaga before she came on stage, and that she'd appear in a Tiffany's Super Bowl commercial leading into the halftime show. Given Beyoncé's recently announced pregnancy and her preparation for a Grammy's performance next weekend, it was pretty unlikely she'd attend for a "Telephone" duet.

Lady Gaga's opening, which included a few bars of "This Land Is Your Land," garnered a huge response, though. First, there was the customary praise from those who saw it as a political statement in direct opposition to President Trump's immigrant ban — a gesture of radical inclusivity from Lady Gaga to let immigrants know that they have the support of a majority of Americans. Many also pointed out the historical context of the original song, which was penned by Woody Guthrie as a radical response to Irving Berlin's "God Bless America," which Guthrie believed was too nationalist and not inclusive enough.

In contrast, several viewers pointed out the hypocrisy, discomfort, and disappointment of Lady Gaga — a white woman — singing the words "this land is my land." The critique is valid, and with the Dakota Access Pipeline protests fresh in our minds, it perfectly illustrates how the struggle of indigenous people to reclaim and hold onto their native lands is not nearly in America's rearview mirror.

Lady Gaga did her best to lend visibility to other marginalized populations, too, shouting out different communities of color and the LGBTQ+ community during her brief rendition of "Born This Way." Most agreed that the quality of her performance overall was spectacular, despite the hit-or-miss efficacy of her political statements.