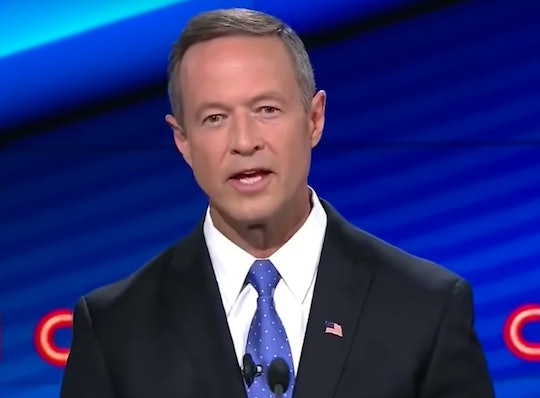 When former Maryland governor Martin O'Malley addressed the crowd at the Democratic National Convention in Philadelphia Wednesday night, he was adamant about enumerating presidential nominee Hillary Clinton's virtues — and intense about cutting down her Republican opponent, Donald Trump. He forcefully and emphatically bashed Trump throughout the speech. But given his speaking quality, his rolled-up white sleeves, and the former governor's super smooth exit and delivery, Twitter took things to another level. Within minutes, reactions to Martin O'Malley's DNC speech began flooding social media, referencing a litany of hilarious dad jokes, among other things.

Like many, many of his fellow Democrats, O'Malley rejected Trump's dystopian view of the state of the country, condemning him as a bully who's quick to anger. "I say to hell with Trump’s American nightmare," he said. "We believe in the American dream."

Although he ruthlessly, diligently, and systematically cut Trump down, O'Malley did it using both air quotes and the epithet "carnival barker," confirming a suspicion that he's actually everyone's dad. Or that his demeanor is definitely reflective of that of dads everywhere. Yes, O'Malley made it clear he disagrees with Trump about climate change, immigration, and the minimum wage, but many on the internet couldn't get past his dad-like enthusiasm — all the way to that triumphant retreat backstage.

I mean, check out the hand gestures:

It all added up to quite the dad-like performance:

And while O'Malley had the dad vibe on lock, some DNC viewers couldn't help but notice he also has a certain physical appeal...

O'Malley may be a forgotten presidential candidate himself (he ended his campaign in February), but his appearance at the DNC reminded many voters of what they could have had. Instead of continuing to fight for the Oval Office, though, O'Malley used his rolled-up sleeves to wholeheartedly throw his support behind Clinton, whom he endorsed in June. "She will stand up to ISIS, she will stand up to the Russians and with Tim Kaine at her side she will never stop fighting for our children and our families, Hillary Clinton knows when our families are strong, America is strong," he said during his DNC speech.

And until November and beyond, Hillary Clinton will surely do her best to make one of America's favorite dads proud.