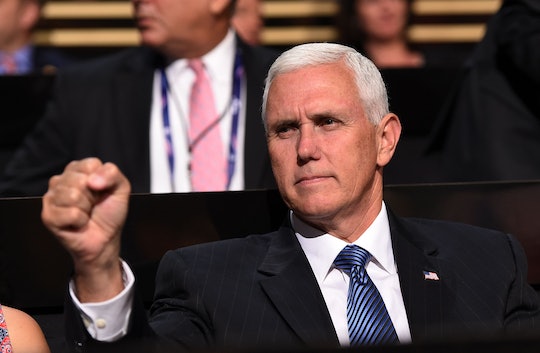 Night three of the Republican National Convention was not as eventful as the first night (thanks, Melania Trump) but it was just as entertaining, thanks to Wednesday night's speakers, which included Texas Sen. Ted Cruz, Eric Trump, and GOP nominee Donald Trump's vice presidential pick, Mike Pence. With the night themed "Make America First Again," viewers knew they would be in for a treat. And within minutes of the Indiana governor taking to the stage, social media reactions to Mike Pence's RNC speech proved that everyone's predictions of another wild evening had been correct.

Trump chose Pence as his running-mate only recently. However, since being introduced as Trump's running mate last week, Republicans and Democrats alike have been seeking out as many tidbits of information about Pence as they possibly could, hoping to figure out what he would address during his speech at the RNC. The address was a great way for the American public to hear Pence in his first formal speaking appearance as Trump's running mate. USA Today initially predicted that the speech would the "most important speech of his career," and for the most part, Pence delivered.

Many critics have pointed out that Trump and Pence aren't necessarily best friends and are not the most ideal combined ticket, given their awkward, conflicting policy positions in the past. Their first televised sit down interview together on 60 Minutes was uncomfortable (to say the least), as neither Trump or Pence could get on the same page about issues or major political decisions from each of their pasts.

However, whatever anxieties anyone had about Pence speaking for Trump on Wednesday night quickly dissipated: After taking the stage to thunderous applause and a wonderful introduction from Speaker of the House Paul Ryan, Pence addressed the crowd with renewed vigor.

"Mr. Chairman, delegates, friends and my fellow Americans. Thank you from the bottom of my heart....I accept your nomination to run and serve as your Vice President of the United States of America," Pence said.

Within moments, all of Twitter was buzzing, both with positive and negative opinions:

Many people had more to say about Pence's looks:

Whereas others had a lot to say on the content of Pence's speech:

Viewers were hung up on the line "you can't fake good kids" — a phrase Pence used when talking about Trump's children:

The audience full of delegates seemed to really love Pence's speech as they kept on shouting and alternating between "We like Mike" and "U-S-A" throughout the speech's duration.

For the "most important speech of his life," Pence did a pretty good job at introducing himself. But everyone will have a lot more to tweet about come campaign season when Pence debates Hillary Clinton's pick for vice president. Now that should be interesting.