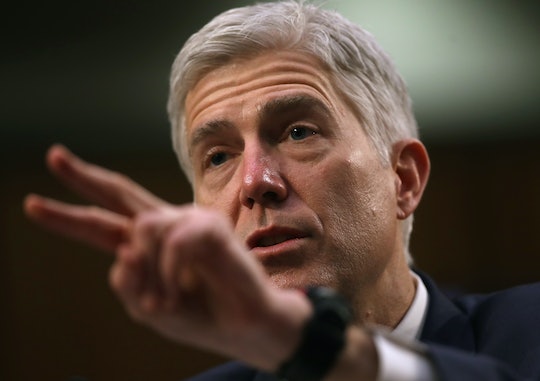 CNN reported that the Senate has cast enough votes to confirm Neil Gorsuch to the Supreme Court. Although Democrats staged a filibuster of Gorsuch this week to stop the confirmation, Senate Republicans triggered the "nuclear option" in order to push it forward — changing Senate rules to allow them to break the filibuster with just 51 votes instead of the traditional 60 necessary. And the reactions to Neil Gorsuch's confirmation show that it's an unpopular decision, to say the least.

The move is somewhat timely, as NPR reported that in 10 days, the justices will start to hear their last round of arguments for this term. And though NPR reported that, "the victory prompted high-fives between Majority Leader Sen. Mitch McConnell and the majority whip, Sen. John Cornyn," many people aren't especially happy with the move, especially in light of former President Barack Obama's pick Judge Merrick Garland never even getting a hearing for his confirmation.

Organizations such as the Center for Reproductive Rights reacted on Twitter, tweeting, "Gorsuch's record on reproductive rights is troubling, but we are ready to lawyer up & take on the battles ahead."

Others weren't always so measured in their approach. Twitter user @rmasher2 tweeted, "They should be voting to confirm Garland. But Repubs lie, cheat & steal to get what they want. So they're voting on Gorsuch, the asterisk."

In fact, a lot of the tweets in reaction described the seat as one stolen by Gorsuch and the Senate Republicans who confirmed him. Twitter user @RVAwonk tweeted, "#BREAKING: Neil Gorsuch has enough votes in Senate for confirmation as Supreme Court justice. Vote is still ongoing; theft is complete."

Politicians reacted to the news as well, with Senator Edward Markey tweeting, "I voted NO on Judge #Gorsuch. In nominating Gorsuch, GOP & Trump put corporations & special interests ahead of Americans."

The Planned Parenthood Action Fund account reacted as well. "BREAKING: The Senate just confirmed Neil Gorsuch after changing the rules to do it," the account began. "#WeObject to a #SCOTUS nominee who’ll take us backwards."

And the LOLGOP account lightened the mood a little, humorously suggesting:

"If you ever see Neil Gorsuch be sure to say.

And standup comic Cameron Esposito tweeted, "Congrats, Gorsuch! Couldn't have happened to a 'Hobby Lobby has a right to control employees' bodies & sex lives'-ier dude," citing a past judicial decision Gorsuch had a hand in.

Finally, political commentator Edward Hardy commented on the state of affairs of American politics today, tweeting, "The fight over Gorsuch shows how partisan America has become. It's not about the Supreme Court, it's about the battle between two parties"

It remains to be seen whether Gorsuch will be as conservative as opponents to his nomination fear. According to The Washington Post, the new Supreme Court justice could start weighing in on decisions as early as next week, as it is expected that Gorsuch will be sworn in within days.