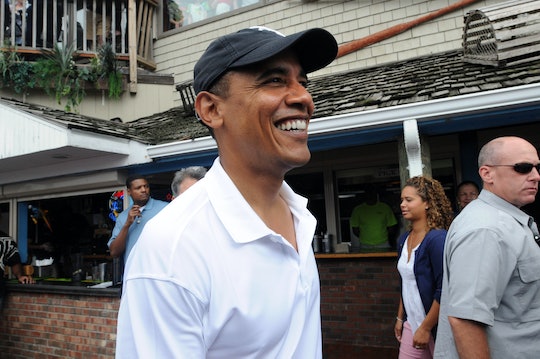 Obama Is In New York & People Are Loving It

It has been just a little over a month since former president Barack Obama and his family were in the White House — but God, it feels like an eternity. The Obamas have definitely been missed — but Barack and Michelle are certainly not absent from the hearts of millions of Americans and they're not gone for good. This is clear from the reactions to Obama being in New York — which show how much people miss him already. The nostalgia to simpler times and the last eight years is real, folks.

After leaving the White House permanently on Jan. 20 after eight years of presidency, Barack and Michelle got the much needed vacation they deserved. According to People, the former first couple spent their first time out of the White House as private citizens in Palm Springs, California and then the British Virgin Islands. But just a few short weeks later, Obama was back in the United States — and on Friday, made one of his first public appearances in New York City — where people went wild cheering for him as he exited a building. After photos and videos were shared of Obama being in New York, Twitter users also reacted accordingly — and they were so happy to see Obama — well, so happy.

In the videos posted to Twitter, a massive crowd outside of a building can be seen cheering for the former president as he waves to his adoring crowd, surrounded by security, with a cup of coffee in hand. According to NBC New York, Obama went on to catch a Broadway show, "The Price" later in the evening with his oldest daughter Malia Obama. Malia is currently interning for Hollywood film producer Harvey Weinstein before enrolling in Harvard University next year, according to New York Magazine, and has been spotted at parties around Manhattan.