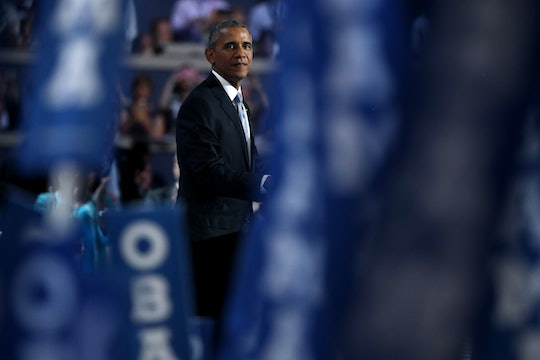 On the third night of the DNC, the Commander in Chief stepped into the spotlight to offer a strong case for electing Democratic presidential nominee Hillary Clinton. Now, reactions to Obama's DNC speech show that there are many Americans who are happy to honor the victories of the past eight years as they look forward to the next four. Excerpts released in advance of Obama's appearance indicated that he'd focus on Clinton's qualifications for the presidency, CNN reported, and a quote included in the White House release emphasized Obama's respect for Clinton's experience:

You know, nothing truly prepares you for the demands of the Oval Office. Until you’ve sat at that desk, you don’t know what it’s like to manage a global crisis or send young people to war. But Hillary’s been in the room; she’s been part of those decisions.

The speech aligns with his larger strategy for supporting Clinton, according to Politico. White House communications director Jen Psaki said that Obama is trending away from talking about Republican presidential nominee Donald Trump in order to focus on what makes Clinton a good candidate. Recognizing that many Americans aren't big fans of Clinton, Obama intended to communicate how he went from viewing her as a political adversary to a valued colleague. Securing a win for Democrats is critical to protecting Obama's legacy, The New York Times reported. In order to ensure a Republican administration doesn't undo the progress of the last eight years, Obama is planning to spend most of October campaigning for Clinton.

Whatever the case, reactions to the president's speech on Twitter showed that voters were largely on board with that game plan:

Fans cheered his endorsement of Clinton:

When Obama mentioned Trump's name, the DNC audience booed. He had a good response ready:

Obama went on to criticize Trump:

Though much of the speech focused on Clinton, Obama did honor Vermont Sen. Bernie Sanders' campaign:

He went on to speak more about Clinton's potential to be a strong president:

Obama finished the speech by talking about how great the United States is already:

And when the speech ended, the DNC audience and the Twitter audience both erupted:

Online reactions both during and after the speech seemed to be overwhelmingly positive:

Clinton walked onstage at the end; She and Obama shared a big hug, then turned to absorb the full impact of the standing ovation. The president's powerful delivery and strong message left fans calling it one of the best speeches in history.