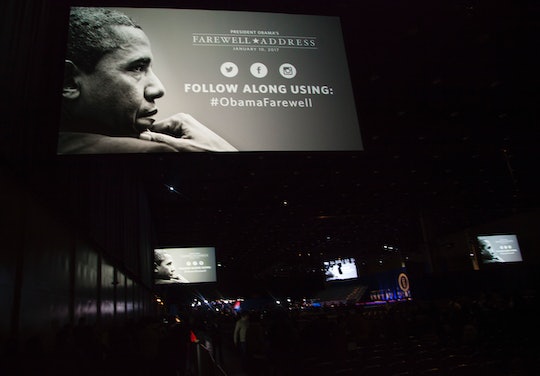 President Obama capped off eight years in the White House Tuesday night with a customary presidential farewell address to the American public. It's a tradition that goes as far back as 1796, when President George Washington gave a farewell address at the end of his presidency, according to ABC News, and since then, many other presidents have continued to mark the end of their terms with one last official speech. When Obama's turn finally came, he definitely did not disappoint, and shared his thoughts and reflections on his time in office, while also offering hope and inspiration for what might lie ahead. With a Trump administration lined up and ready to take over as of Jan. 20, Obama's final speech took on an even more significant meaning than usual for those who are feeling uncertain about the next four years. And reactions to Obama's farewell address show that, for an awful lot of Americans, saying goodbye feels really hard.

With an election that was so polarizing — and honestly, also very surprising and controversial to many voters — there's no question that the country is still very divided ahead of President-elect Trump's inauguration. Not only are many Americans still upset or worried about Trump, his Cabinet, and some of the changes he's already vowed to make as soon as he's sworn in (repealing the Affordable Care Act, de-funding Planned Parenthood, etc.), the loss of a president like Obama, who stood for many of the causes Trump has spoken out against, feels particularly difficult. After all, not only will Obama — a president many people liked and admired — no longer be leading the country, but the man replacing him is one who many Americans believe will be detrimental to everything he has worked for.

It's no surprise then, that a lot of social media comments from those who watched the address focused on how much they'll miss having Obama in charge. In fact, for some, watching the president say goodbye was super emotional:

But even despite their broken hearts, most social media users focused on the particularly inspiring and impressive aspects of what Obama had to say during his speech. Especially when he spoke about racism and immigrants:

Then there were the tweets highlighting the fact that Obama's speech further proved that, well, he is one completely classy, inspiring, and upstanding leader:

And there's no way anyone could ignore Obama's amazing shout out to the first lady:

But, of course, not everyone was feeling the love for the POTUS tonight. Lots of Trump supporters were celebrating the fact that Obama's speech meant we were all that much closer to having a new president they believed would be a much better fit for the country. And others just felt like making it clear that they did not think Obama deserved any applause or credit for his presidency.

Love him or hate him, Obama's farewell address was definitely an important event for the country tonight. During such an uncertain time, hearing Obama reflect back on his presidency, say goodbye, and offer hope for the future was both heartwarming and totally emotional for many people. And, for those who are happy to see him go, at the very least his speech signified an important step in the tradition of ensuring a smooth transition of power — and one we won't be forgetting about any time soon.