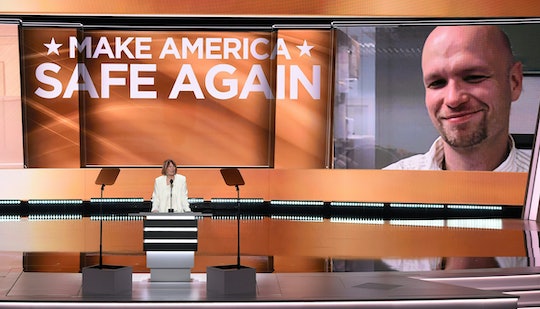 “Make America Safe Again” was the theme for the first night of the Republican National Convention, which kicked off on Monday in Cleveland. One speaker chosen to touch on this theme was Patricia Smith, the mother of Sean Smith who was one of four Americans killed in embassy attack in Benghazi, who angrily declared that she “personally” blamed presumptive Democratic presidential nominee Hillary Clinton for her son’s death. Republicans have used the attack in Benghazi before to argue against Clinton, but, so far, social media reactions to Smith’s Benghazi speech at the RNC show America is still very much divided.

Reactions on Twitter afterwards were fairly split on one of two sides. Some were supportive and outraged for the pain of a grieving mother and agreed with her blame towards Clinton, saying her speech was powerful and brave. Others wrote that they were disgusted and found it unbelievable that the convention would use the mother of a slain soldier to push forward further anti-Clinton political purposes. Josh Rogin from The Washington Post wrote on Twitter: "I feel for Pat Smith, but the RNC and Trump are using her and her son's death for politics and that's wrong."

"Donald Trump is everything Hillary Clinton is not," Smith later declared. "He is blunt, direct, and strong. He speaks his mind and his heart. And, when it comes to the threat posed by radical Islamic terrorism, he will not hesitate to kill the terrorists who threaten American lives."

"Hillary for prison," Smith ended speech with an uproar of applause from the crowd. "She deserves to be in stripes."

Smith’s a prime-time speaking slot surely caught the attention of many and many of those who watched her speech took to social media soon after to voice their opinions. These reactions on Twitter show how deeply divided Americans still are on Benghazi.

Some Felt For Smith:

Others Believed Her Blame Was Misplaced:

Smith's speech ignited disagreements not only between Democrats and Republicans, but also displayed a further divide between Americans on where they stand on the facts of Benghazi attack. Republicans have spent millions to investigate the attack, which in the end found no wrong-doing on Clinton's part, but clearly, there many Americans who still feel unsure about where blamed should be placed.