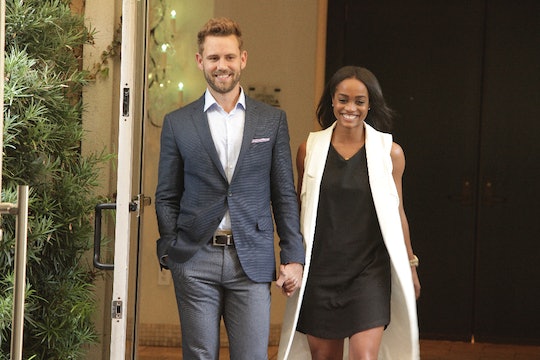 Rachel Opens Up To Nick On 'The Bachelor'

We've come to the best part of any Bachelor season: the fantasy suites. Bachelor Nick is down to three women — Rachel, Raven, and Vanessa — and each of them get the invite to the warm fantasy suite cabin in Finland. Rachel's, however, was definitely bittersweet. We saw how strong her and Nick's connection seemed, but we know their relationship ends, as she's the next Bachelorette. As we watched Rachel tell Nick she loved him, our hearts broke a little. Reactions to Rachel professing her love for Nick on The Bachelor prove that fans are pretty torn up about their inevitable breakup.

Listen, we're overjoyed that Rachel is The Bachelorette. Not only did she make history by being the first black Bachelorette (finally), but she's just a badass lawyer. We can't wait to see 30 men fawn over her, because that's the way it should be. What was also a first, though, was how early ABC made the announcement. Rachel was still a contestant – and as of the beginning of Monday's episode, she still there vying for Nick's heart. By knowing she's the Bachelorette, though, we know she doesn't win. So while we're watching her and Nick's date in the frozen tundra, the fact that they don't end up together is in the forefront of our minds. This was definitely true on social media, where Twitter users were not shy in expressing their feelings:

After their lovely outdoors date of sledding and feeding reindeer (yes, really), Rachel and Nick retreated into their cabin. There, they had a heart-to-heart and things got real. Rachel admitted that she's falling in love with Nick, and Nick semi-reciprocated by saying he's "falling for her" too (in classic Bachelor fashion of never saying "love" this early). The date ended on a high note when Rachel accepted Nick's (or was it Chris Harrison's, really?) invitation to go in the fantasy suite. It seemed like a dream date... but with a massive cloud over it. We know Rachel and Nick don't end up together, so seeing their chemistry right now is just sad.

As of their fantasy suite date, we didn't know what went wrong between Rachel and Nick. We did know, however, that it apparently all went down hill from here. While their date was bittersweet to watch, we do have Rachel's Bachelorette season to look forward to!...and finding out who Nick actually picks, too, I guess.