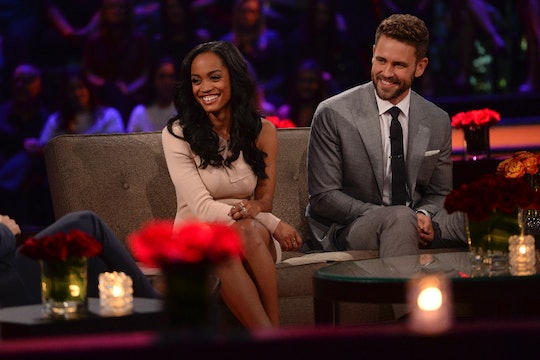 With Monday night's finale, another season of The Bachelor came and went. Out of 30 women, Nick chose Vanessa to be his fiancé, and the happy(?) couple showed up to After the Final Rose to talk wedding plans. What's even more exciting, though, is that out of Nick's stint on The Bachelor comes Rachel's season on The Bachelorette. ABC made the reveal a bit early, but we may be more excited than ever for another season to begin. Reactions to Rachel's first four suitors on After the Final Rose prove that The Bachelorette is going to be a lot of fun — and definitely cringeworthy.

Listen, Rachel may have been upset when Nick eliminated her, but she's clearly living her best life. A few weeks ago, ABC announced her as the next Bachelorette – a first not only in the timing, but she's also the first black season lead. In keeping with this theme of "historic" occurrences (or maybe just to keep us watching), Chris Harrison teased a surprise throughout the finale. During After the Final Rose, he brought Rachel out and finally revealed it: her season of The Bachelorette was starting right then, right now. Yes, four contestants waltzed out of a limo and onto the stage in front of a live audience — and social media definitely had some words for them:

Let's just say the four men Chris Harrison brought out were... eclectic. First there was Demarius, who tried to persuade Rachel with tickets to Las Vegas to elope and a ring (wait, were those real!?). A bit awkward, but not so terrible. Then came out Blake, who was super awkward and brought attention to it. I sympathize, as this was live TV — but c'mon, man. Rachel is the classiest she's ever been, and said she's nervous, too, because she wasn't expecting it. It was after Blake that Chris Harrison asked if she wanted to stop, and while she probably wanted to say yes, she remained a trooper.

After Blake came out Dean, who claimed that "once he goes black, he'll never go back." Oh my god, what did Rachel do to deserve this? Thankfully, she laughed it off. Finally, Eric from Baltimore took the stage and demonstrated some dance moves. It was at that point that Chris Harrison brought this real-live-Tinder nightmare to a close, and said The Bachelorette really begins in May. Until then, we just have the knowledge of these men — and the bountiful memes that will inevitably come from their appearances — to tide us over.