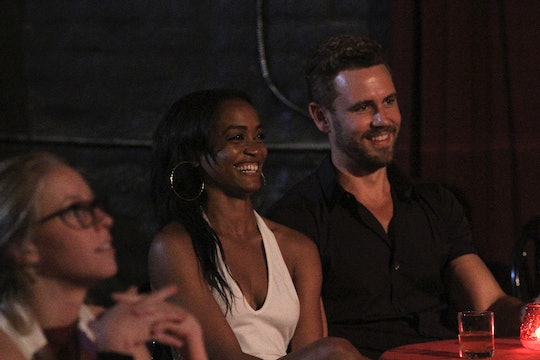 Things Got Creepy On ‘The Bachelor’ Group Date

There are a few things that can scare you while watching The Bachelor...like cringeworthy moments, or Nick's tendency never to make eye contact, or Corinne's wrath if she doesn't get her cheese pasta. On Monday night's episode, though, something purposefully scary was going on: Nick and several contestants went on a group date in a haunted house in Louisiana. A date in a haunted house wouldn't be my first choice, but this is Bachelor Nation after all, so things get a little weird – and social media loves it. Reactions to The Bachelor haunted house group date are so hilarious it's downright scary.

After visiting Nick's hometown in Wisconsin, he whisked the remaining contestants off to New Orleans. After having a magical one-on-one date with Rachel, it was time for the group date. A tour of the Fresh Quarter? Visiting a jazz club? Eating lots of poboys? No! This group date happened in a haunted house. As everyone downed mint juleps, the guide explained that the ghost that haunted that particular mansion was an 8-year-old girl named May who is in an eternal search for her doll.

Some contestants took May much more seriously than others. Jasmine didn't think much of it, and didn't follow rules not to touch her things. When Nick and the women sat with a conveniently-placed Ouija board, they discovered that May was in the house...and all hell broke loose. The lights shut off, the chandelier broke, everyone screamed – and fans on Twitter had to get in on the fun:

Thankfully, no one perished from the haunted house or from May's grasp. After awhile, they stopped focusing on ghosts and started caring about what's important: vying for Nick's heart. There are ten women left, but as Nick made sure to consider, "Now that May's here, there's 11 woman I have to manage." Oh Nick, your life's so hard.

Bachelor Nation's trip to the haunted house was certainly one of the most entertaining group dates of the season. We're not sure where it ranks with the cow poop date, but it's pretty up there. Raven may have been possessed by one of the ghosts, because she revealed to Nick that she was in love with him. While homegirl owned it, it didn't turn out too well for her. Danielle M. ended up winning over Nick (not May?) and received the group date rose. This was certainly a spooky date to remember.