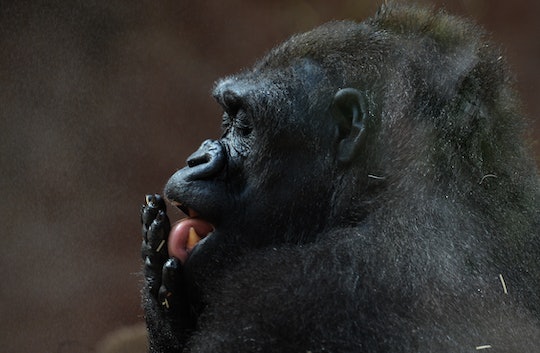 The death of Harambe, a 17-year-old western lowland gorilla shot at the Cincinnati Zoo on Saturday, has sparked outrage among animal lovers. Harambe was killed after a 4-year-old boy climbed into the gorilla habitat. Zoo officials said that they had no other options, as a tranquilizer could have taken too long to take effect, and a dart may have agitated the animal, putting the child in further danger. But reactions to the Cincinnati Zoo incident on social media reveal that many disagree with the zoo's decision, showing that there are no easy answers. One thing reactions do have in common, though, is the belief that Harambe's death is a tragedy.

While some witnesses claimed that Harambe was "violently dragging" the boy around the enclosure, others believed that he was trying to protect the child, and described him pulling the boy out of the moat and standing in front of him to shield him. The boy was unharmed, according to CNN, and unfortunately, it will never be clear what Harambe's intentions were. While some are blaming the child's parents for the death, and others are blaming the zoo for not having a more secure barrier, speculation won't bring Harambe back. All animal lovers can hope for at this point is that future incidents like this will be prevented, although nobody can agree on what course of action needs to be taken.

A petition to hold the child's parents responsible for the incident has been posted on Change.org. According to The Independent, no charges have been filed at this time, but Cincinnati police said that Hamilton County could still choose to prosecute. Some witnesses described hearing the child express a desire to enter the enclosure before climbing over a three-foot fence, through four feet of bushes, and finally landing in the moat. But certainly, if the barriers didn't stop the child, the threat of criminal charges against his parents wouldn't have been any more of a deterrent.

Many are questioning the efficacy of the enclosure's barrier. Zoo director Thane Maynard told Cincinnati.com that, in the 38-year history of the exhibit, no visitor had ever breached the barrier before. Zoo officials also stated that the enclosure is regularly inspected by the Association of Zoos & Aquariums and the United States Department of Agriculture. Current standards for animal enclosures seem to be centered around the goal of keeping the animals inside, rather than keeping people out. The USDA and the zoo will be conducting investigations into the safety of the enclosure.

Some argue that Harambe should never have been in captivity in the first place. Western lowland gorillas are endangered, but they are the most common gorilla subspecies. While the apes are too elusive to be accurately counted, they are estimated to number about 100,000. They're extremely intelligent (they've been observed using tools and can be taught sign language), but are under threat due mainly to hunting and deforestation. Whether in captivity or in the wild, sadly, the greatest danger facing gorillas is humans.