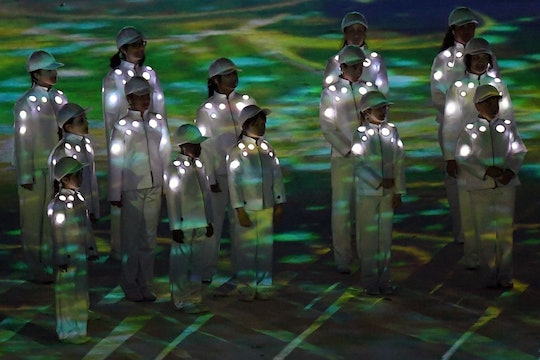 The culminating performance of the Rio Olympic Games concluded what has been a relatively smooth couple of weeks. Brazil featured performers who characterized their nation's culture for viewers all around the world, this time by using 27 children singers who represented its 26 states and one Federal District. Reactions to the closing ceremony children’s lightbulb costumes showed that audience members loved the sweet music as well as the incandescent outfits.

Donning headsets, white zip-up jackets embellished with glowing white orbs, and white caps, the choir all sang Brazil's national anthem together. Many Twitter commentators observed that the anthem was quite lengthy, and they aren't wrong—Brazil's national anthem has two full stanzas that, with refrains, truly sounds like four verses when sung in full.

Both stanzas utilize the lyrics "Beloved Land / amongst a thousand others / art thou, Brazil / O beloved homeland! // To the sons of this land / thou art a gentle mother, / beloved homeland, / Brazil!" In addition, they also both work to paint a picture of Brazil's beautiful landscapes, invoking various waterways and landforms. The Ipiranga River is mentioned, along with the star constellation of the Southern Cross. The sky and sun are also lauded for their beauty.

In addition to the natural world, the anthem celebrates the country's values. Freedom, strength, peace, and glory are listed as pillars for Brazil to build upon in the future. Hearing this creed echo through a younger generation helps reinforce and renew the commitment to all of these exceptional ideals. The choice of bright white outfits—and an illuminated jacket—further perpetuated this symbol.

The reactions below encapsulate all of this—the fashion, the Brazilian pride, and the children as a symbol of renewed faith.

By presenting the song with a chorus of well-lit children, Brazil's national anthem was appreciated even more deeply. Though somewhat puzzling, their outfits were unmistakably bright, offering a hint of hope for future generations.

As the final ceremonies come to a close, viewers are reminded again of the vibrant culture that Brazilians have been so gracious about sharing over the past two weeks. The Olympics have brought joy worldwide, highlighting impressive athletes who have worked their hardest to compete to their utmost abilities. In the closing ceremonies, artists are given the opportunities to perform as best as they can, too, proud to also represent their nation. Despite the drama and turmoil leading up to the games, the games are definitely ending on a high note.