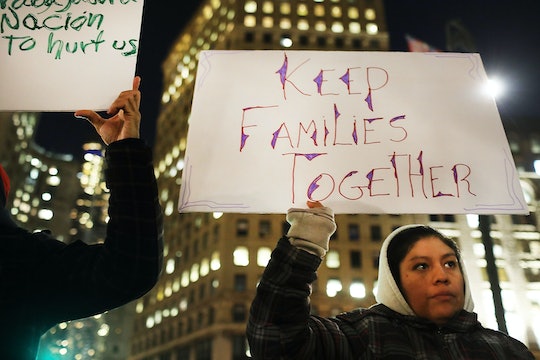 On Thursday, businesses across the country closed in solidarity and protest of the plight of immigrants in the United States. The social media hashtag #DayWithoutImmigrants began trending on Wednesday, in hopes that the demonstration would exemplify just how much the U.S. economy relies on the immigrant workforce. But as the responses on social media have shown, many reactions to the Day Without Immigrants are totally missing the point.

Employees will be staying home from work or school on Thursday en masse, and a march is planned for Washington D.C. later in the day. The intent of which is to show just how diverse the nation's workforce is, and what an integral part of it immigrants are. This comes on the heels of President Trump's controversial crackdown on immigration, which has included ICE raids in many U.S. cities in the last few weeks. Those in opposition have been quick to point out that the U.S. workforces relies on the skills of those who immigrated here to begin careers. One study published earlier this year suggested that patients in the U.S. who were treated by doctors who were international medical graduates had better outcomes than those treated by U.S.-trained doctors. Those "international" doctors weren't just trained elsewhere, either: these were doctors who had been born in another country and ultimately immigrated to the U.S. for additional training and to start practicing medicine.

That being said, as A Day Without Immigrants began Thursday morning, some who took to social media to discuss its impact seemed to miss the point. A number of people on Twitter seemed to think that the protest was specific to "illegal immigrants" — that is, those who are undocumented.

According to data from Pew Research Center, there were 8 million unauthorized immigrants in the U.S. workforce in 2014 — and six states accounted for more than half of those employees: Florida, New York, Texas, Illinois, California, and New Jersey. So too have those states, and their major cities, been the target of recent raids. In the same year, Pew estimated that there were nearly 11 million undocumented immigrants living in the U.S.

The debate between undocumented versus documented immigration has been a near-constant one, and it's not just people on Twitter who haven't grasped the nuances of the discussion. There are plenty of people in power, too, who don't seem to make a distinction between those who have immigrated here legally, and those who arrived here and are still seeking legal status.

As people consider A Day Without Immigrants, many are conflating "immigrant" with "undocumented" — but the fact is, "immigrant" is not synonymous with "illegal alien." The Census Bureau defines immigrants as foreign-born individuals — including lawful permanent residents, temporary nonimmigrants, and unauthorized immigrants. So while those with undocumented status are included under the umbrella term of "immigrant," it's a logical fallacy to imply that all immigrants are inherently undocumented.

More to the point: Data from the Migration Policy Institute showed that in 2014, 47 percent of immigrants were naturalized citizens. The other half or so was made up of lawful permanent residents, students, others here legally on U.S. visas, and, of course, undocumented immigrants.

Immigration is, by definition, a process. And the vast majority of those who come to the U.S. want to do so legally and are cooperative about going through proper channels — a lot of administrative hoops — even if it takes years to be finalized. When the overarching narrative depicts immigration as being inherently illegal, not only is it misinformed, but it's a dangerous perspective — one that conveniently discounts what America as we know it today was founded upon. The United States is a nation that began because Europeans immigrated here and, in fact, dominated the native population by force and did not go through the harangue and vetting that immigrants of today are forced to endure.

As the Day Without Immigrants attempts to show, this country relies on the people who were not born here, but who choose to come here. Those who leave their home countries either to come here and contribute to the economy, or escape the dangers their home country presents.

If American citizens and the government continue to purport these false narratives about immigration, then those who come here for safety from their war-torn nations will find that they are no more protected from violence here than they would be in the country they've tried to leave. The vast majority of immigrants come to America ready to work and pledge their allegiance — believing that the United States is beholden to its totem of "with liberty and justice for all."