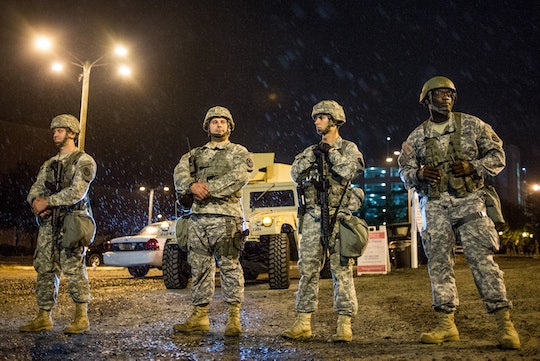 People Are Scared Of The Guard Mobilization Claims

On Thursday, White House Press Secretary Sean Spicer denied a report made by the Associated Press that President Donald Trump has suggested mobilizing the National Guard to round up undocumented immigrants. The AP said the memo is dated Jan. 25, and later uploaded a document confirming that date. It's addressed to the heads of U.S. Immigration and Customs Enforcement and U.S. Customs and Border Protection, and was meant to coincide with the executive order, "Border Security and Immigration Enforcement Improvements." And reactions to the National Guard mobilization claims show that people are alarmed by the story.

According to the Chicago Tribune, the document, at 11 pages long, "calls for the unprecedented militarization of immigration enforcement as far north as Portland, Oregon, and as far east as New Orleans, Louisiana," in some cases far from the border with Mexico. Four states mentioned — California, Arizona, New Mexico and Texas — are along the border, while seven other states — Oregon, Nevada, Utah, Colorado, Oklahoma, Arkansas and Louisiana — are included in the order as well.

The draft memo obtained by the Associated Press lays out a Trump administration proposal to mobilize as many as 100,000 National Guard troops. On Friday, the White House "strongly denied" the report.

Spicer reportedly said of the report, “There is no effort at all to round up, to utilize the National Guard to round up illegal immigrants." He called the AP report "irresponsible," and said it is "100 percent not true."

But someone at the AP begged to differ. In order to back up the claim, the AP Twitter account posted a scan of the memo to documentcloud.org, so readers could take a look for themselves.

It's harder to claim something like this is fake news when such a piece of evidence is presented to back it up. But some are saying that's all it is. A spokesperson for the Department of Homeland Security said the memo was a very early draft, and the idea for a mass mobilization of the National Guard was “never seriously considered,” according to Vox.

But others are seriously alarmed by the report. Immigration advocates, reporters, and others reacted to the news on Twitter today.

Reporter Matt Pearce made the point, "people's paranoia about National Guard troops would be less credible if the administration hadn't surprise-banned people from 7 countries"

Twitter user @BlakeHardeman suggested another motive for the memo suddenly getting media attention. "The National Guard story unfortunately is a way for Trump to try to delegitimize the media. Create a draft, purposefully leak it, deny it."

And Twitter user @ashcech tweeted, "That the Trump administration is even thinking of using the National Guard to round up people should horrify you," pointing out that even considering such a course of action is extremely troubling.

And activist and Women's March on Washington organizer Linda Sarsour noted, "For those saying the immigration roundup is just a draft memo, well, the #MuslimBan was once a "draft" memo. Stay alert."

Linking to a tweet about the memo from the AP's Twitter account, writer Shaun King stated, "I have already been contacted by several current members of the National Guard who said they would be courtmarshaled [sic] before obeying this"

And apparently, the Associated Press did try to ask for comment before releasing the news. Politico White House reporter Josh Dawsey tweeted,

"I wish you guys asked before you tweeted," Spicer tells AP reporter on plane. Reporter says they asked many times for comment.

It remains to be seen what will come of the claim that the White House considered mobilizing up to 100,000 National Guard troops for detainment and deportation purposes. But the fact that such an idea was considered at all is alarming to many.