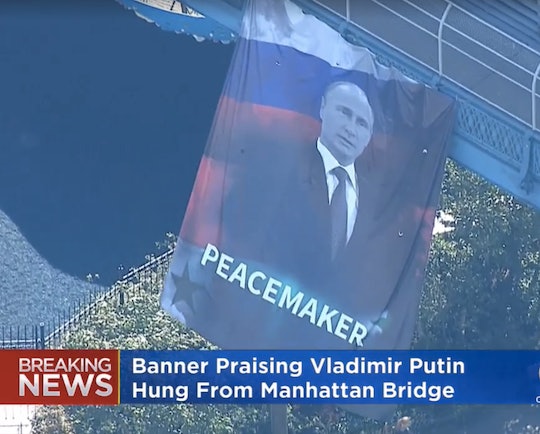 Brooklyn was subject to quite the view this Thursday afternoon as a 20 by 30 foot banner featuring a photo of Vladimir Putin was unfurled in a decidedly conspicuous location. Sporting a stern photo of the Russian president, the banner bore the sole slogan "PEACEMAKER." The rest of the banner presents Putin in front of a Syrian flag as well as a Russian flag. Immediately following the unveiling, varied reactions to the Putin banner on the Manhattan Bridge showed that patrons of the internet have some similar theories as to how all of this came about, as well as who might have been involved in carrying out such a sneaky yet public act.

New York blog The Gothamist relayed that the sign was first displayed at around 1:47 p.m. ET. At this point, two people were reportedly standing near the sign, but it's unclear if they were actually involved in its setup. A DUMBO officer worker who observed the banner's hanging told the blog: "It took them a while. They were kind of fumbling with it. They definitely were lacking in stage management experience." The Gothamist speculated this event might be connected with an indie 2014 pro-Putin "Peacemaker" t-shirt shop in the Gramercy neighborhood of New York City. By 2:55 p.m., officials were removing the banner from the bridge.

Quite an odd turn for a Thursday afternoon, the theories immediately began linking the banner to Trump. The internet definitely agreed that this could be the case:

To some, it was simply a non-issue:

Others weren't even into theorizing—they just found it weird:

The video below shows a time-lapse of the banner waving over the water:

Donald Trump, who has praised Putin since as early as 2007, has actually been trying to distance himself from Putin in recent days. Though as late as Sept. 8 of this year, Trump told Matt Lauer that Putin "has been a leader far more than our president has been" in a national security forum, he's seemingly been backing off.

By Oct. 4, Trump had flip-flopped, tweeting: "CLINTON’S CLOSE TIES TO PUTIN DESERVE SCRUTINY." Just yesterday, he told a crowd of supporters in Nevada:

A spokesman for the New York City Police Department stated that, in regards to the Putin banner on the Manhattan Bridge, "there are no details on why or who" was involved in the banner. Whether this incident was related to Trump, Trump's supporters, or a different path entirely is unclear. As of now, there have been no arrests made by police.

If nothing else, you can't say it didn't make for a wild Thursday afternoon.