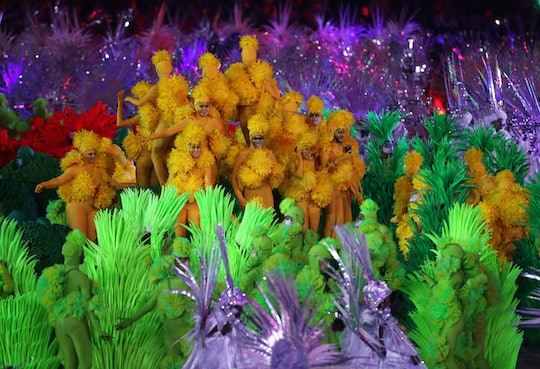 The dancing vegetables took the stage after the Rio Olympic flame was formally extinguished and the real Carnival-inspired party began. During that annual celebration, which precedes the start of Lent in the predominantly Catholic country, people typically get festive with brightly colored costumes, masks, parades and lots of dancing. Vegetables are not generally involved, but, hey, the more the merrier. As New York Times reporter Victor Mather put it about the Rio closing ceremony, "A great finale that embodies the spirit of Rio. Cutbacks sometimes made it feel like these Games were being put together on shoestring. But the spirit of Carnival excess is certainly here. Even the broccoli can’t stop dancing."

Even during a closing ceremony that had many viral moments, the vegetables seemed to get a whole lot of attention. Some viewers at home were simply confused while others embraced the veggies with the kind of enthusiasm their mothers' could only hope they would demonstrate at the nightly dinner table.

You know, the involvement of some celery, broccoli and carrots at the Olympic's closing ceremony really makes sense when you think about it: The athletes are prime examples of healthfulness, so why not give viewers a visual reminder of some of their dietary staples? Plus, this is a great way to encourage people to eat their veggies, right? With a little inspiration, maybe we can meet them in 2020 in Tokyo! Or, at least, maybe you. I'm a few slices into a pizza right now.