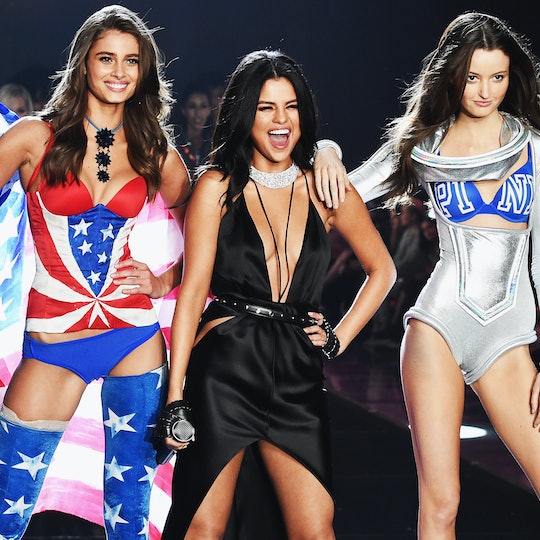 The wings, the lace, the hair: The annual Victoria Secret Fashion Show aired Tuesday night on CBS, ushering in supermodel newcomers Kendall Jenner and Gigi Hadid. While the addition of the modeling world's newest It girls was, arguably, the most notable moment of the evening, it was hard to ignore the reactions to the Victoria's Secret Fashion Show on social media.

In a Fashion Week Daily interview published earlier Tuesday, supermodel and angel Jac Jagaciak described the Victoria's Secret Fashion Show models as "confident, sexy, and strong," and many times throughout the show itself, supermodels were quoted as saying the show celebrates strong, sexy women, and that's what they enjoy most about being in it. That sounds totally possible, but the show also makes it clear that it's celebrating one particular body and beauty type — extremely thin, made up, waxed — and the work the women who walk in the show put into achieving it. An unfortunate side-effect of that focus on elevating a single beauty ideal is that it apparently didn't make female viewers feel strong or sexy. Twitter quickly filled with examples of women comparing their own bodies to the models' in punishing ways and expressing the feeling that they need to alter themselves to better meet the idea. Here are some examples of things women watching were tweeting about themselves:

Clearly watching the angels walk the runway brought up a lot of negative body image in some viewers and a lot of self-criticism. It's hard to watch the stunning supermodels that grace the Victoria's Secret Fashion Show runway and not compare yourself. It's hard, in the moment, to recognize that these women look the way the do in part because it's their job. Many of the supermodels who make the cut and are given the opportunity to participate in the show work out seven days a week and hire nutritionalists to monitor their diet. They devote all of their time to maintaining their appearance because their career depends on it.

These responses to the show on Twitter reveal how badly we need for other types of beauty and strength to get the level of visibility that the very specific type celebrated by Victoria's Secret does. Brands and the media still have a long way to go toward representing other manifestations of female strength and beauty and glamour. But those other types are there, and they are equally desirable.

The Victoria's Secret Fashion Show upholds conventional beauty and strength in its ultimate, singular form, which can be entertaining and sexy, sure. But beauty and strength are relative and multifaceted and fluid and (thankfully) change depending on each, individual person. Fortunately, one form strength and beauty can take is sitting on your couch, enjoying the Victoria Secret Fashion Show, and saying, "Good for her, not for me," while you eat a double cheeseburger.