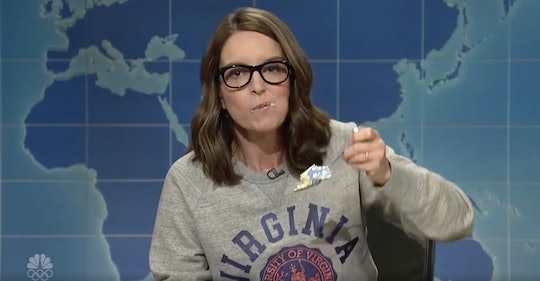 Tina Fey's Stress-Eating Take On Charlottesville Is Everything

It's no secret that there is lot of really awful stuff happening in this country right now, and at this point, it's easy to feel permanently angry and completely frustrated. But that can also easily feel really overwhelming, and sometimes we all need a little comedy catharsis. Saturday Night Live has been bringing its Trump-inspired political A-game since well before he actually took office, and if you're one of the many Americans feeling majorly concerned about his presidency, it's likely felt totally validating. But on Thursday, beloved SNL alum Tina Fey returned for a surprise appearance to discuss the recent protests in Virginia, and reactions to Tina Fey's Charlottesville "Weekend Update" show that it was pretty much exactly what the world needed to see right now.

To be clear, the fact that white supremacists and neo-Nazis proudly gathered to unapologetically spew racist hatred in public last weekend isn't actually a laughing matter. But in her SNL appearance, Fey — who is also a University of Virginia grad — used her comedic talent to make some really important points about the violent protests, and dealing with our collective outrage. Fey's satirical solution? A "grassroots movement" she called "sheet caking," according to The Washington Post, which is basically just stress-eating cake and yelling. And unsurprisingly, it looks like Twitter is totally here for it in the best possible way.

In the skit, Fey showed up wearing a University of Virginia sweatshirt, and said that it "broke her heart" to watch the Charlottesville protests. And like much of the country, Fey is angry. But instead of getting into shouting matches with neo-Nazis at upcoming rallies, she suggested an alternative method of protest:

I would urge people this Saturday, instead of participating in the screaming matches and potential violence, find a local business you support, maybe a Jewish-run bakery or an African American-run bakery.

Fey then brought out a sheet cake decorated with a picture of the American flag, and told viewers to "just eat it," according to USA Today. Then, she (literally) dug right in, and issued a perfectly scathing response to anyone still advocating "tolerance" or sincerely arguing that there was "violence on both sides" (oh hey, Donald Trump):

The next time you see a bunch of white boys [in] polo shirts scream about 'taking our country back,' and you want to scream, 'it's not our country, we stole it from the Native Americans ... And when they have a peaceful protest at Standing Rock, we shoot at them with rubber bullets, but we let you chinless turds march through the streets with semiautomatic weapons. And when you want to yell that, don't yell it all the Klan, Colin. Yell it into the cake.

Fey's "Weekend Update" has made a big splash on social media, where many praised her for perfectly communicating exactly how they are feeling right about now:

And in fact, it looks like #SheetCaking has totally become a thing:

Of course, Fey's bit was about way more than simply making a joke about eating our collective feelings. In addition to criticizing Trump's opinion on Confederate statues, House Speaker Paul Ryan's lack of Twitter skills, and the reality that there are "over 250 well-armed militias across the U.S. ready to mobilize at any time," she also offered up some thoughts on how to deal with the fact that more rallies are being planned across the country.

Fey's take? That "all good, sane Americans" should "treat these rallies like the opening of a thoughtful movie with two female leads: don’t show up." She then added that Americans should "let these morons scream into the empty air."

There's no question that Charlottesville has been the latest reminder that hatred and bigotry are absolutely alive and well in this country, and obviously just making fun of it on TV won't do much to solve it. But what Fey did do was offer up a validating reminder that, actually, there are a lot of people out there who aren't even sort of OK with what's happening. And that when we're done eating our feelings, it'll be time to get to work.