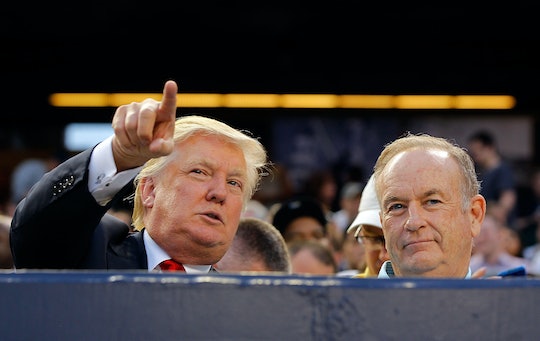 Today, history was made. And no, I'm not talking about football, or the obviously superior Puppy Bowl that aired earlier. No, I'm talking about the taped interview President Donald Trump gave Bill O'Reilly this afternoon, prior to kickoff. In the interview, among heavier topics such as keeping the "bad people" out of our country, and of course, illegal voters — like Steve Bannon being registered in two states, right? — Trump also gave his own two cents on who he thinks will win the Super Bowl. As Trump is a known Patriots fan, and in fact, friends with quarterback Tom Brady (I'm told this is an important position on a football squad. Team), it should come as no surprise that Trump has favored The New England Patriots to take the Super Bowl 51 title, by a thin margin of eight points. However, this new prediction, while not exactly surprising, seems to have garnered some new fans for "the other team," the Atlanta Falcons, as Americans opposed to Donald Trump flocked to the Falcons fanbase after hearing Trump's prediction. Better than that, the general wave of reactions to Trump picking the Patriots for the win are enough to brighten anyone's day, football fan or not.

After Trump's interview, Twitter and Facebook were abuzz with reactions to Trump picking the Pats — and to help make the world seem a little less crazy, here are the best ones, courtesy of this non-football-watching Texan:

Even prior to kick-off, it was abundantly clear that even the most apathetic of Super Bowl viewers were prepared to take sides, because now, even the Super Bowl has become politicized.

While there are definitely non-political, or non Trump-supporting Patriots fans out there, it seems that, for the most part, Twitter has become divided. Obviously, at the heart of it all, we're all Americans, and we're all here to eat some good food, and watch a good game, too, I guess. But there's no denying the fact that after Trump's prediction, the Atlanta Falcons seem to have a larger fan base than they did before:

For most people, though, Trump's support of the Patriots is nothing new, and knowledge of the team's ties to the president has been around for a while. But with his new prediction, came forth a new movement of the resistance, and now it seems that so much more is at stake than just a trophy.

Whatever happens, though, at least there is food, and Lady Gaga, and the internet to keep everyone happy, no matter who wins. (Hopefully.)